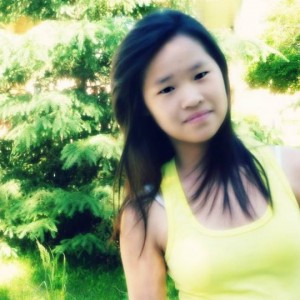 
follow block report
Heyy Der' :)
The names Katie.
I am 16 going into grade11
I live in Saskatchewan Canada!
I am adopted, and chinese.
I am outgoing but sometimes shy, im also caring, funny and great at helping people.
I have an amazing family, 2 brothers and one sister. And 2 amazing parents.
My sister is 7, and shes a foster girl. But i love her to death, and shes pretty much ours. <3
oh & im taken by Nathan . Weve been dating for 9 months (:
Wanna get to know me more? Come at me !
Follow, Comment and ill do the samee! :D

Dont forget if your reading this, than YOU are beautiful. 
A Guy Had A Crush On
This Girl
He followed her wherever she went.
One day the girl noticed and asked the guy.

Girl: Why do you keep following me?
Boy: Because you're so pretty and I think I'm falling in love with you.
Girl: Really? But you haven't met my friend yet. She's prettier then me and she's right behind you.
(The Boy Turns Around)
Boy: Are you making fun of me? There's no one behind me.
Girl: No, but if you really loved me, you wouldn't even bother to look back.


i saw this somewhere.. wanna make it pretty? go ahead.
-xBeautifulDngerx
3 0


Am I the only one
Who checks Top Quotes, and thinks ...
How the HELL do these people think of that ?
[♥]

9pudtz9
funny
PLEASE READ:
A girl Amanda Todd was in 7th grade. She was on webcam with some cute guys. Her friends left & it was just her and this guy. He kept calling her cute, beautiful.. i mean commong when a guy calls you beautiful you instantly fall in love right? He asked her to flash her. So she did. He took a picture of it. A year later, he somehow contacted her & found out where she lived. He asked her to do something, and he said if she didnt do it he would post the picture of her boobs on facebook. Amanda didnt do it. December 4am the police knocked on the door with her picture. The boy has posted it on facebook and his profile picture. Amanda went into deep depression, anxiety, starving, cutting. Everyone in her school called her a sk*nk and mean words.. Amanda switched schools several times. But that guy always found her.
One of her guy friends asked her to come over, and Amanda went... The next day her friend texted her saying 'come outside' Amanda went, and there were 50 people yelling and calling her names. One guy yelled "just punch her already" So someone punched her and beat her up while all the kids were laughing and Video taping. Amanda was found in the ditch by her father. She ran home and drank a whole bottle of bleach. but she lived. :)
It kept getting worse & worse each day. Amanda hung herself on Wednesday Oct09.
You know what makes me mad? Nobody did anything about this bullying untill after Amanda passed away. Bullying is a serious thing & i hate it so much. I know this wont do much, but like to pray for Amanda.

PLEASE ANYONE TALK TO ME IF YOU ARE GETTING BULLIED OR NEED HELP. I AM HERE FOR YOU.
4 0

9pudtz9
inspirational
Hi
&Hey
hii! but why did you say it twice?
Oh, thought I'd be nice and say it to both of your faces.


i think you know i like you alot
But your about to miss your shot.


A woman brought you to
to this  world,
so you have no right to disrepect one.
189 3


Funny how a melody sounds like a memory like the soundtrack to a july saturday night
springsteen.♥


Dear Boys,
Be the type of guy you would want your daughter to be with.
3 0