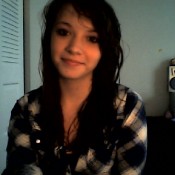 I'm Brittany and here's a little about me:

Hi, I'm Brittany. Since I'd like to help you guys going through tough times and stuff, I'll fiifteen and I've been through a lot. My mom used to be an alcoholic, but she never got help or anything, it was her boyfriend that would always get her drunk and stuff. Her boyfriend abused her. He had two kids, Gina and Erica, and they were like my sisters, I grew up with them, and we'd wake up in the middle of the night to find them yelling at each other and him hitting my mom. Erica, being a year younger than me would be in the closet crying, and Gina being a year older than me would try comforting us. Well, that year I got into a car accident due to my mom's drinking and driving, nothing serious, but it really did affect me because I was like seven years old, maybe younger, and if someone didn't stop that night, God knows what would of happened to me, we had no cell phone and we were in the middle of nowhere. Anyway, last year I had my heart majorly broken, but I don't want to get into all that. But I also love this boy I met when I was in seventh grade, and I can pretty much relate to any situation thanks to him.. Thanks for reading. :)

Please read this if you're going through tough times:

I realize many of you are not in the best time in your life right now, but things will eventually get better, believe it or not. Self harm is not the answer, so please don't do it for your sake and your family's sake. There are people that care about you, there are people that love you and wouldn't know what to do without you being around. The worst thing you can do is lose control of yourself because of a guy. Majority of guys ARE assholes but there are some nice guys out there, trust me. If you're insecure, all girls are. Even the best looking ones. If you're social life isn't that great because you have few friends, well, try and make more. I know it's hard. I'm really shy. Which is why I try and dress nice so people approach me and I won't be considered as 'lame.' Labels suck. If you've been back stabbed by a friend, which isn't very rare, try and make new friends. I've recently lost two of my best friends over stupid things. If you're arguing with a good friend over nothing, be the more mature person and apologize, one of you will most likely regret fighting over something so dumb.

If you need advice, please come talk to me.
I'll help you with any problems.
If you don't want to talk about it on witty, I'll give you my phone number or e-mail.

Adviiice
funny
If you need advice, please come talk to me.
I'll help you with any problems.
If you don't want to talk about it on witty, I'll give you my phone number.

Adviiice
funny
If you need advice, please come talk to me.
I'll help you with any problems.
If you don't want to talk about it on witty, I'll give you my phone number.