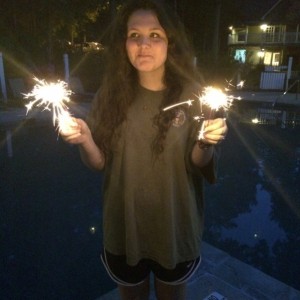 my name is sydnie {obviously}, i'm seventeen years old and i'm a junior in high school. i'm an artist and a writer from the beautiful state of georgia. i'm an adrenaline junkie and a double dog dare will get me to do just about anything. pinky promises should never ever be broken, and if i pinky promise something then you know i'm serious. i'm a big people pleaser and a major pushover. i'm really sarcastic and if you can't handle that, we probably won't get along too well. i'm actually physically incapable of being mean to anyone though. i'm the most imperfect person on the face of the earth, but i'm a perfectionist. where's the logic in that? i love to help people and i've been told i'm good at giving advice, so feel free to talk to me about anything. no judgement zone, i pinky promise.

i don't get on here much anymore, so follow my tumblr if you want to reach me. xx

“Charm is deceptive and beauty is fleeting; but a woman who fears the LORD is to be praised.”
– Proverbs 31:30

“Let no corrupting talk come out of your mouths, but only such as is good for building up, as fits the occasion, that it may give grace to those who hear.”
– Ephesians 4:29

“I can do all things through CHRIST, who strengthens me.”
– Philippians 4:13

can i call, wake you up on a sunday?


I'm falling for your eyes,
but they don't know me yet♥


BEAUTY IS IN THE EYE OF THE BEHOLDER.♥


I LOVED YOU FROM DAY ONE.♥


WHEN YOU'RE GOING THROUGH HELL?
KEEP GOING.

Crestfallen
inspirational
DRY YOUR EYES GIRL.
YOU'RE BETTER THAN THIS.♥

when witty was a place for venting. not quotes you find on tumblr. I remember when we had inspirational users, like jayciecutie01 and xoalicecullenxo and marissa123. they were original in their quotes and their formats alike. they'd build people up with their quotes and post things totally relatable. now all i see while scrolling through top quotes is things found on tumblr. i used to be guilty of it. but not anymore. as of today, i pledge originality. this one's for the old witty. ♥

B**ch, Please.
I could wipe your beauty off with a kleenez♥