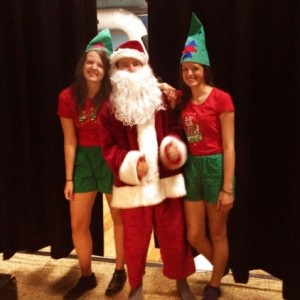 
follow block report
{http://ask.fm/EmilyScott5998 you should definitely ask me some questions xo

Once, a big fat frog and a lively little frog were hopping along together, when they had the misfortune to jump straight into a pail of fresh milk. They swam for hours and hours, hoping to get out somehow; but the sides of the pail were steep and slippery and death seemed certain.

When the big frog got exhausted, he lost courage. There seemed no hope of rescue. “Why keep struggling against the inevitable? I can’t swim any longer,” he moaned.
“Keep on! keep on!” urged the little frog, who was still circling the pail. But the big frog decided it was no use. “Little Brother, we may as well give up,” he gasped,

Now only the little frog was left. He thought to himself,

“Well, to give up is to be dead, so I will keep on swimming.”

Two more hours passed and the tiny legs of the determined little frog were almost paralyzed with exhaustion. It seemed as if he could not keep moving for another minute. But then he thought of his dead friend, and repeated, “To give up is to be meat for someone’s table, so I’ll keep on paddling until I die-if death is to come-but I will not cease trying-‘while there’s life there’s hope!’”

After a while, just as he felt completely numb and thought he was about to drown, he suddenly felt something solid under him. To his astonishment, he saw that all his kicking had changed the consistency of the milkd he'd been swimming in and he was resting on a lump of butter

And so the successful little frog leaped out of the milk pail to
freedom.

Emacy
funny
The other day I tried to catch some fog
I mist.
2 0

Emacy
funny
Do I have any Beauty marks?
Yeah, I call it my face.
7 0

Emacy
funny
lying on your back because your fat rolls give into gravity on the side.
3 0

Emacy
fat
So you could have approached me, told me why youre so angry and we could have sorted it out.

instead you chose to turn my friends against me and write cryptic fb statuses directed at me.
totes picked the right option there babe xo.

Emacy
awkward
I spend more of my waking hours in my bed than with my family...
2 0

Emacy
funny
Not knowing where the auto-play music is coming from on someones profile and just generally being frustrated at life.
9 0

Emacy
funny
I just rang up the pizza place pretending to be my mum because they didnt deliver my Hawaiian and quite frankly that is the most rebellious thing ive ever done and im still on an adrenaline high from my act of rebellion.
11 0