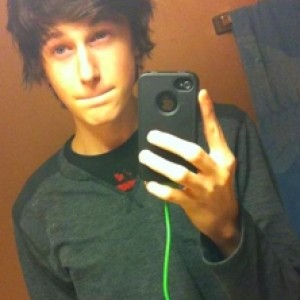 ZEKE
I'm Zeke, weird name, trust me, I know.
I'm Australian, and I'm 15 years of age.
Xbox, skating, friends, family & music
is basically my life so yeah whatever.
My sister Nadia showed me this, eh.
I don't know what to say, so bye now.

I'm not an easy person to be with. I know that. I probably won't even try to
make it easy for you. I'll be really difficult at times. It may seem like, at times, I don't want you, and I don't like you, but I do. I'll be a challenge, because I'm not the type of person who people walk all over. I'm not the kind of person who puts up with bullsh.t. I'm not the kind of person who will give you sympathy comments. When I say something, I mean it. If people are a.ssholes to me, I throw them out of my life. I'm annoying, I'm hilarious, and I'm the world's biggest jerk. I'll make you want to scream and punch walls; I'll ruin your day and save it at the last minute. I'll drive you crazy and, sometimes, you'll hate my guts. But even though all that's gonna happen, and I swear it will, I have an amazing side to me. I do. I have a giant heart. I'll always be there when you need me. Even if my life is impossibly knotted, I'll try to untangle yours by listening and loving. I won't stop caring about you, not even if you push me away. You're different from everyone else, and I like that.
It's refreshing to find someone different in the world because way too many people are the same.
57 2

1. A rabid young female carrying an unhealthy obsession with band member(s) or fictional character(s). Often found screaming in a large group of other 'fangirls' at a concert or related convention.

2. A delirious, obsessed young woman determined to see, meet and/or marry a particular famous person. Sometimes found in the corner of a darkened room rocking back and forth, questioning their existence without said famous person.

3. A species of amazing, fun-loving, slightly mad teenage girls dedicated to worshipping band members or fictional characters. They usually fill their hopes, dreams and poster-lined bedroom walls with the particular famous person(s), and can be found dressed in the appropriate fandom uniform (e.g. various band t-shirts). A variation in species of fangirl can sometimes result in hate for each other, but generally, fangirls are some of the greatest people ever to live.
15 0

EpicUsername
love
This quote does not exist.
33 3

Have you ever fallen in love? The kind of love where whenever that person
is around everything just feels right, you feel safe, at peace, and complete?
Like nothing in the world can change how much you care for that person and
how you feel for them? That wonderful, beautiful, kind of love? Have you ever felt it?
Or have you ever loved someone who didn't love you back? Fallen for a person who
is so out of reach, out of your league, but you still try anyway? Just to be let down?
Have you ever had to keep your feelings between you and one you love? So nobody
else knows about them? The painfully mysterious beautiful kind of love? Yeah?
Well my name is Alice Fern, and I've felt all of those things, all at once.

NOTE: This is my first story on here, I haven't written in ages so
sorry if its not great right now I promise you it'll get better soon.

"Alice, wake up loserhead!" I heard a squeaky voice say as I felt someone poking my arm,
I looked up, it was my best friend Melody, we were in math class. I wondered how long I had been sleeping for, since we were in math I was guessing a long amount of time. I sighed, pushing some of my long burgundy hair behind my ear and looking around the classroom, of course, Finn was staring right at me, he seemed to be doing that a lot recently, I didn't really understand why, I guess he and I were friends, we joked around and say hello to eachother with big smiles every morning, but there was nothing really going on, maybe he wasn't looking at me, maybe I'm just looking into things too much, I don't know, I tend to do that a lot, it never ends well, so I stopped myself.

About a minute later the bell rang, all the students seemed to just leap out of their seats and rush out the door, which I guess was understandable, math was basically heII, but I stayed in my spot, there was no way that I was going out there to be followed around by Kelsey all day, so I just looked down at my books again and pretended to be doing something as I usually did around this time.

"So I'm guessing you're hiding from Kelsey again today..." I heard a voice say.
it made me jump I looked up to see him standing there, Finn, his brown eyes stared at me, his dimples showing as he smirked lightly, his dark curly hair perfectly placed as usual, the sun shining right on him.

"You scared the sh//t out of me Finn!" I laughed lightly, then nodded "Yeah, whats it to you?"
"I'm shocked you aren't transparent." he chuckled, "I guess I was just curious." he shrugged.
It took me a moment to realise that he was implying that I was full of it, I rolled my eyes "You're a loser." I laughed lightly at him the way I always did, gentle but not over the top like most of the other girls.

I guess you could call Finn a player, he had dated majority of the girls in year 9, he could be wildy flirtatious which could honestly get irritating, but he never really flirted with me, I think he knew not to.
I mean don't get me wrong, he was incredibly good looking, but I guess I just wasn't looking for a romance, at least not then I wasn't, little did I know that everything was about to change.

NOTE: I just thought I'd get the fact that some parts of this story are actually
true, names and some events are changed though. Once again, I promise this
will get better soon, you need at least a little bit of a build up before drama. xx


Other peoples' moms when they go out with friends: Okay, sweetie, have a good time!
My mom when I try and go out with friends: Who are they? Do I know their parents? Have I met them before? Do they have jobs? What college do you think they want to go to? Do you have any classes with them? Do they get in trouble? How old are they? How long have you known them? Do they have allergies? What kind of music do they listen to? Should I invite them for dinner? Have I met their parents? Is it a boy or a girl? When's their birthday? What kind of shoes do they like? Are they gay? Have they ever smoked weed? Do they date? Are they single? How do they do in school? Are you best friends with any of them? You're not thinking of going on a romantic date night with these people, are you? What's their favorite food? Do they do drugs? Are they pot-dealers? Do they have a Facebook? Do they use Tweeter or whatever that's called? What about FaceTube? Are they weird? Are they funny? What kinds of jobs do they have? Do they even work? Do they give their parents attitude? Do they disobey the laws set for your own personal safety? What's their stand on the governmental issues of the environment? When do they get their hair cut? How often to they eat? Are they fat? Are they skinny? Do thy sass teachers? They're virgins, right? Do they get straight A's? Do they drink? Do they drive? Do they drink and drive?
43 0

WhenAllElseFails
funny
This quote does not exist.
11 0

so I was sitting in my room listening to "young, wild & free" and I changed the lyrics.

"So what we post quotes?
So what we don't sleep?
We're just having fun,
Only care if peasants see,
So what we never go out?
Thats how its 'sposed to be
Living Young, Wild & Witty."