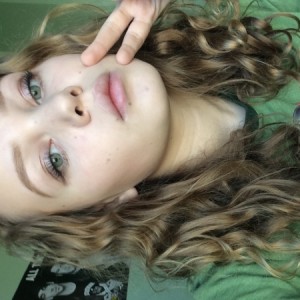 so i paint myself grey and lie down for a while,
i'm saving my palette for those who aren't colorblind.
17 1

hyperion*
poetry
you keep crushed glass in your pockets
and like to tighten your fingers around the shards.
you won’t let anyone help you pick out the pieces
but sit there and complain about broken mirrors
and the loneliness in this world.
19 0

hyperion*
idontknow
when i was younger, i had a deathly fear of bugs, and unfortunately sharp eyes. i would see a bug sitting on the wall, and i would stop absolutely everyone and everything to point it out, and then, you know, squish it. but as i got older, i realized that these bugs, little moths, little white house spiders; they're just lonely insignificant creatures, trapped on the wrong side of the screen door. and they beat their little heads against the window panes trying to escape, but just can't comprehend how small and fleeting they are, how weak. i wonder, if maybe, they do know, and they don't care. life for these little bugs is short, sand in an hourglass running, running, running; they're powerless, chewing holes through old coats in the backs of closets to pass the time. create, learn, retain, recreate, die—over, and over again. if everyone lived the way they do, everything would move so slowly. time wouldn't go so fast. maybe, that's why they do it.

hyperion*
idontknowwhatthisis
i am the ocean.
i am all powerful.
i answer to no one, but the moon and its pull.

i am hues and foam,
i am so much,
undiscovered and unknown,
wine dark and deep and churning.

i am life and death.

i am the ocean
i am all powerful,
but the depths get lonely.

i am dark, and cold.
only the surface, picture perfect, is warm.
i have so much thriving life in me,
but i am so alone.

but maybe, hopefully,
you're the moon's pull,
and maybe i'm not so powerful after all.
10 1

my room feels too small
i am trapped behind my face and
my voice is shaking but
there is no one here to hear it.

there is a cold clammy feeling
i feel hot but i warp myself deeper into my sheets,
i feel itchy
and unattended.

i can hear the neighbors in the next house and the bird below my window
it is so loud yet so silent
my voice is shakingb but
there is no one here to hear it.
9 1

hyperion*
stupidandlackingpunctuation
“If all cosmos were the same distance apart, gravity would pull them all in the same direction. They’d remain perfectly aligned, and precisely nothing would happen. Irregularity, imperfection, and lack of order in hydrogen compacts, atoms of gas gravitating away from each other, and compressed temperatures is what created our universe. Perfection in our galaxy simply does not exist. Without imperfection, neither you nor I would exist.”

—Into The Universe with Stephen Hawking: ‘The Story of Everything’
20 1

hyperion*
notmine
"in the end, humans are more concerned with having, than being."

the calm before the storm set it off, and the sun burnt out tonight.

hyperion*
falloutboy
I remember when you first told me about him. I remember when you told me about his eyes and the jokes you had, and how he liked you but how you weren't sure if you felt the same way. I remember asking you how you were going to tell your parents, and when? Weren't you worried they wouldn't understand? You'd wondered if they'd think that you were going down the same path as your heroin-addled brother, still living with his old boyfriend who'd thrust him into his habits in the first place. I told you not to worry, that I'd be there for you. You laughed, and told me that I was the only normal one around here. If only you'd known. That raised so many questions for me, questions about me. You thought you knew who you were, but did I? I'd always been commended on my extreme self-awarness and sense of self, but this was unlike anything I'd ever known. I've been plagued by questions of who I am and where I lie, questions I'd never pondered aloud for fear that someone could hear me. And honestly, now, you sit across from me, at the foot of my bed, reading quietly, shaking the bed subconsiously but with the force of an earthquake, and I sit here, screaming in my head, clawing at myself from the insides, about who I am, and who I could possibly love.
17 2

hyperion*
writing
Format made by Sleepy. Please, ONLY use this as a quote on witty. Do not use for your profiles, do not use to make your own tumblr themes, do not use on any other site. Please leave credit in the coding and do not remove any current credit.
ten truths- these suck and i am boring sorry
a.n. - no one is going to read this so i'm not quite sure why i'm writing this. anyways.

1. i love drawing, and art in general, and i excel at it. people say i should go to art school, become an art teacher or a designer or something, but i fear it's too unreliable.

3. i hate when people have high expectations of me.

4. my music taste includes almost everything other than rap/hip-hop, but mainly leans towards subgenres of punk and alternative. my favorite bands include all time low, you me at six, and twenty one pilots.

5. i have at least five plants growing on my windowsill and desk at any given time.

6. i prefer rainy weather and grey skies to any other kind of weather. i love how bright green all the grass and leaves and trees appear in contrast to the sky.

7. i love traveling. my next trip is to nova scotia, and i cannot express how excited i am about that.

8. sometimes songs and movies inspire me to change my life or go out and do something great or make something or just create, but the feeling usually only lasts for a few minutes. maybe if it lasted longer i'd actually do interesting things.

9. my favorite movies are: the art of getting by, pitch perfect (sue me), all time low: straight to dvd, and the breakfast club.

10. these are terribly boring and i am terribly sad.

11. bonus- i'm supposed to be writing my submission for an end of the year speech, but i've wasted more time than necessary doing this instead. i hope it's worth it.
8 3