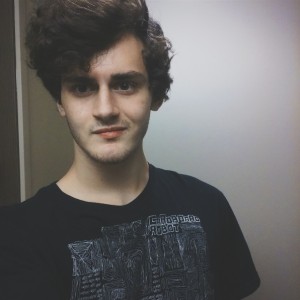 
follow block report
Layout Credit
I solemnly swear that I am up to no good.
. Hey, I'm Chris and Tigers Jaw is my favourite band.
I'm the vocalist for Hotel Houses, indie/post-punk band.

Just, some of us are better at hiding it, than others.
1 0

Christopher Robin*
weird
You start with something pure...
Something exciting, And then come the mistakes...
The compromises...
We create our own demons.
Of course, there are those who say progress is dangerous,
But none of them ever make any. So if I were to wrap this up - tie it with a bow...
I'd say that the world is dangerous, But that danger needs people like us, brave.
18 0

Christopher Robin*
inspirational
The way you look at me, it's a lot
like the way I look at you.

And believe me, moonchild,
I have
never looked or loved anyone as much as you.
9 0

Parts of me don't truly understand how...
Now, I don't know if it's for the better or for the worse.
But about three things, I am absolutely certain.

I've found exactly what I need in my life.
That exact, one thing...
Is her.

Everything about her...
Her laugh,
Her smile,
The way she fumbles and messes things up,
The way that she feels bad for her past,
The way that I only want to hear it - and it won't change how I feel,
The way she looks into my eyes and tells me from the deepest part of her that she loves me.

She's everything.
I can't exactly say why...

Just... because I love her and I don't need any reason for that.
It's just there... and I couldn't be happier about that.

When things go wrong, as they sometimes will,
When the road you're trudging seem all uphill,
When the funds are low and the debts are high,
And you want to smile, but you have to sigh,
When care is presing you down a bit,
Rest, if you must, but don't you quit.

Life is strange with its twists and turns,
As every one of us sometimes learns,
And many a failure turns about,
When he might have won he had struck it out;
Don't give up though the pace seems slow--
You may succeed with another blow.

Often the goal is nearer than,
It seems to a faint faltering man,
Often the struggler has given up,
When he might have captured the victor's cup,
And he learned too late when the night slipped down,
How close he was to the golden crown.

Success is failure turned inside out--
The silver tint of the clouds of doubt,
And you can never tell how close you are,
It may be near when it seems so far,
So stick to the fight when you're hardest hit,
It's when things seem worst that you must not quit.
11 0