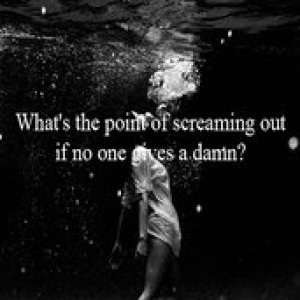 If you're not on this list, I hate you.

When you are pmsing and you anger your brother
so much that your punishment is him hiding your
heating pad so that you are forced to suffer and
quite possibly be forced to kill him as revenge.
2 0


You better be packing some major cash in that wallet;
I'm not one of those 'salad eating' girls.

Ineedmakyinme
ayee
Q: Have you ever,
bent over sneezing
&
blown out a tampon?

A: That's our family's version of paintball.

Ineedmakyinme
funny
If I committed suicide...
I wonder how many
gasps,
cries,
screams,
tears,
or words will be spoken as a sign of love


But then I remembered..
It's 3:25am and I'm
alone,
tired,
scared,
sore,
and silently screaming for help


No one really
notices,
cares,
thinks,
shows,
any sort of attention


If I commit suicide...
please don't say you
missed me,
loved me,
cared for me,
found beauty within me,
or I should have tried harder


Because I wouldn't have a stomach full
of pills
and blood stained wrists at 3:26am
if you
missed me,
loved me,
cared for me,
or found beauty within me.
0 0

We started off talking on the phone at night,
until we both fell asleep and never realized till morning.
& now,
I find myself wide away at 2am,
wanting nothing more than to fall asleep to the sound of your voice;
singing, laughing, whispering, just talking,
and not being able to because you're already asleep,
and I'm waiting for you to wake up,
to hear your voice one last time,
until I wake up in the morning,
just to do it all over again.

Wait, maybe it's our loved ones
trying to wake us from the coma.
The just can't scream loud
enough.


Wow, why the f.u.ck would you say that.


The last person to ask me how I was,
was paid to do so.

Ineedmakyinme
life
I think that life isn't for me anymore
&
that I belong somewhere else;
preferably dead.
3 0


"WAIT WERE ADAM AND EVE EVEN MARRIED?!?!
"OH MY GOD"
"THE BIBLE JUST COLLAPSED ON ITSELF"


I'm trying to get me this beach body.
I'm trying to become bay watch bearible.
But instead I find myself being called a beached whale,
asking if i need help getting my fat body back to the water.

They don't realize that that's what I crave the most,
where I am able to be free,
floating on the calm water,
rather than deal with the torturous waves crashing down on me.
Depression-like storms crashing over my head dragging me down,
suffocating me 60 feet underwater choking me unconscious.

As if a single tear is from being called a name,
where sticks and stones break bones, but names aren't suppose to hurt.
No, they don't, but they push you over the edge, into the abyss of suicidal thoughts,
of self doubt and self harm, with no return until you are either drugged and hospitalized or dead.

As if fitting in and belonging means making someone else feel left out and alone.
Where causing someone enough pain makes them want to go home, into the white clouds early.
It's as if they crave the need to hurt someone to feel some sort of self worth,
when really, they're digging their own grave,
The only difference is that I, will be in mine before they are in theirs.
Only when I am dead, will they realize their mistakes.

Im trying to get me this beach body.
That J-lo tan, that Emma Watson look-a-like, Jennifer Lawrence self confidence,
beach body.
But at the end of the day, I find myself not wanting it,
not needing, craving, trying to get the look every girl is suppose to have.
Because in the end it's pointless,
I'll still have my scars,
my bruises,
my pain.
Even if nobody can see them.

The feeling of being a loser,
invisible,
broken,
alone.
Even if nobody cares.

The wounds from the first try still haunting me,
where it gets to the point that I know even if I did change,
new names will be thought of,
new jokes to crack,
new self confidence to break,
new laughs joining in on the fun.