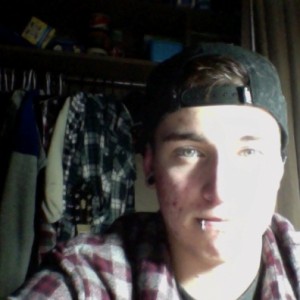 STATUS:is it bad that i hate myself for feeling paranoid?

Keep quiet boy,
don't say a word,
pick up this brush
and show them,
oneday, you'll shake
the world.

If people talk behind my back,
I'll let them,
I have no control over it anyway
and quite frankly,
those people aren't worth my time.

I don't really understand,
but I'll just keep moving,
motion and a simple smile
has never failed me yet

You never really know what's changed
until you look at an old picture and remember
exactly how worse it was back then
and realize how far you've come and
how many demons you've defeated
to get to today.
It's crazy.

Dear whoever doesn't believe in, nor understand me,

I have battled 16 monsters, each one stronger than the last, to save my princess.
I have tolerated a little annoying fairy for miles and slayed a giant, ugly, leprechaun, to save the one I love.
I've saved my world and it's creatures from a black gear virus that threatened to turn these creatures into killing machines.
I've came from nothing and saved my island's harvesting by showing kindness and work ethic.
I've slayed 5 dragons and howned my skills to master every dungeon.
I was a prince who defeated my evil brother, creatures of darkness, became king and restored honor and economic growth  to my kingdom.
I've defeated countless futball teams from around the globe to win the cup.
I came from nothing, started out with one friend, was bullied and told that I could never win anything and accomplish my journey, yet I traveled the land, far and wide, caught all 151, beat all the gym leaders, defeated the elite four, and the league champion, then tore down an evil corperation three times in a row and became the world's greatest.
Along each one of my journeys, I've made mistakes, big and small, but I never gave up. Not once.

I stand in the wake of darkness,
hunched over in pain, my mind going insane,
a mini harpoon in my hand,
dripping dark matter, ink splatter, dreams coming to life

What broke me, shattered me,
destroyed the last wall I had,
I stand on this rubble, pen in hand,
finally knowing who I am