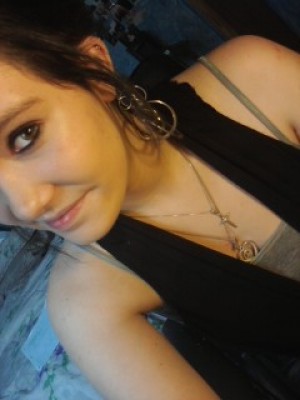 
Heeeey. (: I'm Kaela.
I'm sixteen, an only child and in 11th grade.
Quotes describe my life.
I try to be the best I can be and always be there when someone needs it.
I'm a very different person, but in some ways, I'm just like everyone else.
I accept peoplefor who they are, no matter what they look like.
I'm a little kid at heart.
I'm a writer and I've been in some sort of choir since the 4th grade.
I'm Christian so I'd appreciate it if you wouldn't judge me. (:
Ohh, thank you for favoriting my quotes; I appreciate it. :D

Okay, so, one of my best friends is really upset right now.

She's upset about her ex boyfriend who treated her horribly.

She thinks no one can love her and never will. She thinks she isn't good enough.

Could you do me a favor and favorite this or comment telling her the truth so I can show her this? Maybe she'll believe me that someone cares; she's been screwed over too many times..

KaelaBettyLynn67
inspirational
Don't come crawling back to me...


you know exactly what you did...

KaelaBettyLynn67
break up
A girl went to a party and she ended up staying longer than she planned, and had to walk home alone. She wasn't afraid because it was a small town, and she lived only a few blocks away. As she walked along under the tall elm trees, Diane asked God to keep her safe from harm and danger. When she reached the alley, which was a short cut to her house, she decided to take it. However, halfway down the alley she noticed a man standing at the end as though he were waiting for her. She became uneasy and began to pray, asking for God's protection. Instantly a comforting feeling of quietness and security wrapped round her, she felt as though someone was walking with her. when she reached the end of the alley, she walked right past the man and arrived home safely. The following day, she read in the newspaper that a young girl had been killed in the same alley just twenty minutes after she had been there. Feeling overwhelmed by this tragedy and the fact that it could have been her, she began to weep. Thanking the Lord for her safety and to help this young woman, she decided to go to the police station. She felt she could recognize the man, so she told them her story. The police asked her if she would be willing to look at a lineup to see if she could identify him. She agreed and immediately pointed out the man she had seen in the alley the night before. When the man was told he had been identified, he immediately broke down and confessed The officer thanked Diane for her bravery and asked if there was anything they could do for her.. She asked if they would ask the man one question. Diane was curious as to why he had not attacked her When the policeman asked him, he answered, Because she wasn't alone. She had two tall men walking on either side of her. Amazingly, whether you believe or not, you're never alone. Did you know that 97% of teenagers will not stand up for God? Re-post this if you truly believe in God PS: God is always there in your heart and loves you no matter what "If you deny me in front of your friends, I shall deny you in front of my Father" STAND UP FOR HIM 51% won't re-post this be the one who's smart whom he protects.
I love my Lord. <3

KaelaBettyLynn67
inspirational
I know my quotes aren't the prettiest or get the most favorites, but I don't really care...


It's the thought that counts.

KaelaBettyLynn67
inspirational
Being someone you aren't is just a waste of time...


You'll always end up being who you're supposed to be anyways.

KaelaBettyLynn67
inspirational
If I could find the words to describe how much I love you...

It's not who you are that holds you back...
It's who you think you're not.

KaelaBettyLynn67
inspirational
If you don't fit in, maybe you aren't supposed to.
6 0

Okay when you read this; really think about it and what it means.
Why do we sleep in church,
but when the ceremony is over we suddenly wake up?
Why is it so hard to talk about God, but so easy to gossip?
Why are we so bored when we look at a Christian magazine, but find it easy to read Playboy?
Why is it so easy to ignore a Godly myspace message, Yet we repost the nasty ones?
Why are churches getting smaller, but bars and clubs are growing? Why is it so hard to fight for what you believe in, when its so easy to get in a fist fight.
Think about it, are you going to repost this? Are you going to ignore it, cause you think you'll get laughed at?
Just remember God is always watching you. The Lord said:
"If you deny me in front of your friends, I will deny you in front of my father." 90% of you won't repost this; Be part of the 10% that will. <3
4 0

It just means until next time.