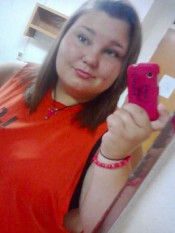 I make a wish every October 10.

Witty is my escape from the real world.

KatieAnn10
inspirational
I love Sydney Case Griffin more than anyone in the entire world. Just saying... .(:
She is pretty bad assssss.
2 0

So my step dad left last night and didn’t tell anybody.
Left my mom without a car no money and no way to support her kids.
We live with HIS mom so also he left her with NO house!!!
I don’t know what to do or say to her to make her feel better.
And on top of all of that, the guy I’m in love with called me and told me he Is going to prison today and that if he goes to the one he thinks he is going to that there are people waiting there for him to kill him!! :(
I fell like my world just crashed around me. </3

Thirty-two secrets. Be honest no matter what.
One - Where was your default picture taken?
My dorm room
Two - Are you being honest?
Yuppe
Three-Have you ever lost a close friend?
Yeah
Four - What is your current mood?
Depressed
Five- Whats your brothers name?
Bobby, Billy and Hunter
Six - Where do you wish you were right now?
Lake House ♥
Seven - Have a crazy side?
Most definately
Eight - Ever had a near death experience?
Many of them
Nine - Something you do a lot?
Listen to music and think
Ten - Angry at anyone?
YES
Eleven - What's the last thing you said to your mom?
“I’m am, that’s what I just said.”
Twelve - When was the last time you cried?
Saturday
Thirteen - Is there anyone you would do anything for?
There’s a couple
Fourteen - What do you think about when you are falling asleep?
My frodo ♥
Fifteen-Do you still have pictures of an ex boyfriend?
All of them
Sixteen- What was the last thing in your mouth?
Reecees Peices
Seventeen- Who was the last person you talked to on the phone?
Amanda
Eighteen- What is your favorite song?
Mirror-Lil Wayne Featuring Bruno Mars
Nineteen- What are you doing right now?
Typing this and listening to music
Twenty - Where did you get the top you are wearing? Gordman’s
Twenty-one- Do you enjoy drama?
Speech and other peoples drama
Twenty two- Describe your life in three words?
Loud, Strong, & enthusiastic
Twenty three- Who are you thinking of right now?
My frodo. ♥
Twenty four- What should you be doing right now?
Web Design II work
Twenty five- What are you listening to?
Me and Charlie Talking- Miranda Lambert
Twenty-six- Does it annoy you when PEOPlEzz TAlk likE THiS?
YES, makes me wanna teach them proper grammer myself
Twenty seven- Who was the last person who yelled at you?
My mom
Twenty eight-Why were you last sad?
Family problems
Twenty nine- Do you use smiley faces on the computer?
Definatley
Thirty-Have you ever changed clothes in a vehicle?
Many times
Thirty one- Are you happy with life right now?
Not even close
Thirty two- Is there anybody you're really disappointed in right now?
Yuppe

I need a Witty best friend; any takers??

Lets go back to when things were way simplier. <3

Jeans and a t-shirt kinda girl <3

Heck, that’s on my good days.

I’m a basketball shorts and a baggy tee kinda girl! :)

Anyone can be B E S T friend, but it takes a certain someone to be a T R U E friend. <3