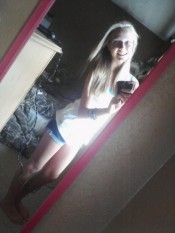 
I don't want to
makeout with you...
I want to kiss you slowly in the pouring rain.

Just because someone
is gay, Doesn't mean they're not human. They were carried in the Whom for 9 months, they were born with 10 fingers & 10 toes. The only thing that is different about them is there orientation.

lollipopx3
story
This quote does not exist.
6 1

Chapter 23
The weekend was over before I knew it, and I was already back in hell, school.
Girls were gossiping in the school hallways about who they hooked up with after the winter formal, and guys were counting how many girls they got to grind with in one night.
I rolled my eyes at the immaturity.
Biting my lip, I saw Jesse leaning against a locker, talking to Jessica.
He didn't look as flirtatious as usual.
In fact, Jesse looked irritated.
He rolled his eyes whenever Jessica giggled.
He looked behind Jessica, and noticed me watching him.
My eyes widened, as I blushed, quickly walking by him.
"Wait, Kendall!" he called out.
I stopped dead in my tracks, turning around weakly.
Jesse had caught up with me, holding my arm, as Jessica glared at me with envy.
"Jesse, we were talking." Jessica gritted through her perfect, white teeth.
Jesse fegined a sorrowful face.
"Oh, sorry, Jessica. I just need to talk to my girlfriend." Jesse smiled.
I stopped breathing. Girlfriend?
A growl escaped Jessica's perfect, pouty lips, as she stomped her feet.
"Fine!" she gave up.
She approached Jesse, holding the collar of his t-shirt.
She narrowed her eyes, and planted a kiss on Jesse's soft cheek.
"I'll see you later." she giggled, pushing past me.
As soon as she was out of sight, I looked back up at Jesse.
He was wiping his cheek with the back of his hand.
I raised my eyebrow in amusement.
"She left something gross and sticky on my cheek." Jesse groaned.
He sniffed the back of his hand, making a face.
"What the hell? It smells like cotton candy."
I laughed, smacking the side of his arm.
"That's because it's lip gloss." I explained.
Jesse chuckled, walking down the hall with me to class.
"Well, girls shouldn't use it. It's disgusting." Jesse grinned.
"But, it's the thing that makes guys fall head over heels for them. Pouty, shiny lips." I sarcastically said, rolling my eyes.
Jesse paused. "Well, I like natural girls."
His gaze met mine, but he quickly looked away.
I felt my heart beating.
What was this feeling? It was weird.
"L-like who?" I boldly asked.
Jesse's lips curled as he stared off into space.
"Someone like-"
Before Jesse got to finish, someone called out my name.
I sighed, turning around to see Scarlett waving me over.
Why was it times like these when Jesse and I always got inturrupted?
"You can go. Chemistry is just down the hall, anyway." Jesse assured, shoving his hands in his pockets.
I bit my lip, and nodded. "I'll see you later."
I caught up with Scarlett, as she raised an eyebrow with confusion.
"What were you doing with the jerk?" she snarled.
I rolled my eyes. "Jesse's not a jerk."
Scarlett stopped in her tracks. "Why are you defending him?"
"Because he's not a jerk. Honestly." I frowned.
Scarlett smirked. "Oh, you are so falling for him." she muttered.

11/11/11 :)
HEEY GUYSS. So, like. I love you all for reading and stuff. lol.
& if you have nothing nice to say about my writing, then don't comment.
i dont appreciate people calling my characters and stories 'retarded'. it's a rude insult and an improper word. ;)

Chapter 24
I got home later that day, finding my mom passed out on the couch, once again.
Beer bottles and half eaten boxes of Chinese food were scattered on the floor.
I stared at my mother's sleeping body with disapproval, as I began cleaning up her mess.
As I held a few glass beer bottles in my hands, the doorbell rang.
It startled me, causing me to drop the bottles on the floor.
A loud crashing sound echoed in my house, as the glass shattered.
I bit my lip, glancing over my mom.
I let out a breath, knowning I didn't wake her up.
Thank God she was a heavy sleeper.
I tip toed to the front door, trying to avoid getting my foot cut.
When I opened the door, Jesse stood there.
"Why are you here?" I panicked.
Jesse frowned, dusting the snow off of his black hoodie.
"Hello to you, too." he sarcastically said.
I bit my lower lip, looking behind me.
My house was a mess! I couldn't let Jesse in, especially not now.
I rolled my eyes at Jesse.
"Hi, Jesse." I greeted. "Now what do you want?"
Jesse seemed hurt for a second, but he replaced it with a smirk.
"What? Is it so hard to believe that I came to visit you?" he asked.
I hesitated. "Yes."
Jesse placed his hand over his heart, pretending to be hurt. "Kendall, how could you?" he cried.
I sighed. "It's a bad time now. Can you come over tomorrow?"
Jesse seemed curious now.
He peeked over my shoulder, but I blocked him.
"What are you hiding from me? You're so mysterious, Kendall." he groaned.
"Nothing, it's just... I'm studying." I snapped.
Jesse raised an eyebrow. "Studying? Oh, I could study with you."
I shook my head quickly. "No, no! I'm good. But thanks."
Jesse grunted, with his expression turning angry now.
"I'm tired of you making up excuses, Kendall. Why aren't you letting me in?" Jesse crossed his arms.
I avoided the sharp look in his eyes.
"Is it because Cole is in there?" Jesse coldly asked.
My eyes widened.
"He is? Isn't he?" Jesse angrily asked.
Before I could stop the six foot figure, he pushed me over gently, entering my house.
I shut my eyes tightly, as soon as I heard the footsteps stopping.
Jesse thinks I'm psychotic now.
I peeked out of my eyes, seeing Jesse standing, staring around my living room.
It was now that I realized how messy and bad it looked.
Broken shards of glass were everywhere, and it didn't help that my mother was passed out on the floor.
Jesse slowly turned to me.
"Kendall? What's going on?" he asked softly.
I swallowed the lump in my throat, and sucked in the insides of my cheeks.
I opened my mouth, but nothing came out.
What was I going to say to Jesse?
"Well, Cole's not here." I lamely said.
I mentally slapped my self for even thinking of that.
"Is there something you want to tell me?" Jesse asked lowly, trying not to wake up my mom.
I shook my head.
"Nope, not really."
Jesse grunted at my stuborness.
"That wasn't a question."
I sighed, and sagged my shoulders.
"Do you want to go for a walk?" I asked.

three strikes
Chapter 10
I returned home later that night, to find my house pinch quiet, with the exception of my mother lightly snoring on the couch, with an empty bottle of beer in one hand.
I grunted. She had been like this ever since dad died.
I glanced over at the dining table, to find stacks of unopened letters scattered around.
I pulled a chair out, as I began ripping every one of them open, even though they were adressed to my mother, Alexis Merill.
I took out my reading glasses, and began doing the bills.
After completing the electricity, water and gas bills, the door bell had rung.
I glanced over at my mother, who was still knocked out on the couch.
I groaned, as I approached the door, straightening the glasses that had falled on the bridge of my nose.
I swung the door opem to reveal Jesse with rosy cheeks, and specks of snowflakes in his dark hair.
"Well, are you going to let me stand here in the freezing weather, or let me in?" Jesse asked, raising an eyebrow.
I gulped, looking back at my drunk mother.
I slammed the door in Jesse's face, as I rapidly ran back to the living room.
I couldn't let Jesse know that my father was dead, and my mother was a train wreck.
He would humiliate me to no end!
I picked me mother up, and dragged her to her bedroom.
I tucked her in bed quickly, and closed the door.
I ran back to the front door, swiftly swinging it open.
Jesse still stood there, with more snowflakes covering his shaggy head of black hair now.
"Are you going to slam the door in my face again?" Jesse growled.
I took a gulp, and moved out of the way to let him in.
As soon as Jesse stepped in, he fanned his nose.
"Ugh, why does it smell like beer in here?" Jesse asked.
I mentally slapped myself.
How could I forget the Febreeze?!
"Don't pretend to be disgusted, Jesse." I snapped. "You're quite a drinker yourself."
Jesse's disguted look turned into a smirk. "That's true."
I casually paced through my kitchen, trying to notice if anything was out of place.
"So, uh, what exactly are you doing here?" I asked.
Jesse grinned.
He reached in his back pocket, and took out an envelope.
He tossed me it, as I caught it in one hand.
The envelope was thick, and definetly over the average weight.
"What is it?" I asked.
Jesse chuckled. "Oh, Kendall. Don't tell me you've forgotten about our deal. It's Friday, isn't it?"
I opened the envelope, and surely enough, there were fifty twenty dollar bills neatly tucked inside.
My first payment.
"T-thanks." I muttered, feeling slightly guilty.
Jesse tilted my chin up, smiling.
"Don't thank me. My family has plenty of money." Jesse explained.
I felt envious, since he grew up getting whatever he wanted, while I had to start working full time at the age of fifteen.
"And, besides. If you do better next week, I might even double your amount." Jesse suggested.
Oh God, the shame in my stomach was unrealistic.
I bit my lip, taking in a deep breath.
"Oh, and Kendall?" Jesse said, before leaving the door.
"Yes?" I asked.
Jesse's lips curled. "I need you to go to a party with me tomorrow night. Cole will be there. We'll go to the mall before that, to get you your winter formal crap, or whatever."
Jesse disappeared through the doors.
"It's a date." I muttered.