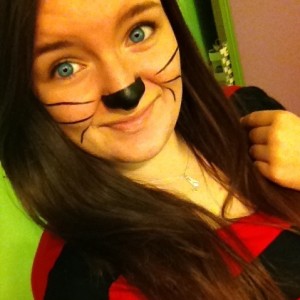 MadisonKing
funny
But he's just so cute. How could I resist?
5 0

On Tuesdays you spat daisies, and Wednesdays
were for Chinese takeout, and the space between
the kitchen and the bedroom smells like 7:03 a.m.,

when she used to wake up and ask for pennies
and our wedding bands, and when I asked why,
you’d shake your head and hand me a papaya,

orange, medicinal, seeds like birth marks, the color
of a pill bottle. I remember when the doctor told us
that he had no prescriptions left, and you told him

that’s a shame because you love things that intensify,
like lost hair, hospital bills, plastic bags, the shade
of her November sunburn. Her funeral smelled

like peach tea, broken air conditioners, and it wasn’t
even raining, and she would’ve hated the blue bowl
of lemon drops, wrapped and dusty, and everyone

MadisonKing
poem
I pushed out a baby bird with a broken ribcage and wings that were another pair of legs, complete with claws. It didn’t breathe at all this turkey vulture, though I loved it for all its deformities. I loved it because it would never know the joy of flight —even if my birth canal hadn’t crushed its wispy bones. Because everyone had bought me strollers and diapers and socks that didn’t match, I felt I had disappointed them with a stillbirth. A stillbirth of a turkey vulture, whose second pair of legs we splayed and nailed to our barn doors as if that would say this whole fiasco was a joke. But it wasn’t. When I held that turkey vulture, stiff as though it had been dead for months, the afterbirth stuck in its feathers, I picked its molting down and knew such a song couldn’t be sung with a hammer and nail.
3 0

MadisonKing
poem
I know a boy who called his girlfriend’s body a “crime scene.” Dad, my body is a crime scene. My body is lint and gasoline and matchstick. My body is a brush fire. It’s ticking, Dad, a slow alarm. I have rain boots. Lots of them. It isn’t raining anymore. The words are coming back, Dad. The way they fit and jump in the mouth. I want ice cream and long letters. I want to read long love letters but I don’t think he loves me. I think I’m used up. I think I’m the grit under his nails, the girl who looks good in pictures. I don’t think he loves me. I think they broke me, Dad. I think I drink too much and it’s because they broke me. I heard about two girls recently, two women crushed like cherries in a boy’s jaw. It opened me, Dad. My body is melted wax, it is ripe and stink and bent. It is a mistake. I walk like an apology. I don’t hate men, Dad, I don’t. I want a washing machine. I want someone else to do the dishes, someone to walk the dog. I have a hornet in my head, Dad. A hornet. She’s an angry woman — she hurls herself against my skull. She stings. And stings. I know I don’t make sense, Dad. This is the problem. I’m a sick girl, a crazy wishbone. I have razors under my tongue. I’m sorry I cut you, Dad, I’m so—so sorry. I gave you a card for Father’s Day once, it said you were my hero. You are. Your laugh is a thunderclap, you love like surgery. I think they broke me, Dad. I can’t erase their faces. I want to swim, Dad. Remember when I used to hopscotch? I used to make you laugh. My feet are hot. The bottoms of my feet are scorched sand, August asphalt. My body is a slug, a mob of sticky wet rot. No one touches me anymore because I’m rot. Because my body is a spill no one wants to clean up. They cracked me open, Dad, I know you don’t want to hear about it. You don’t want to hear how they scissored me, how they gnawed me like raw meat. No one wants to hear how they made me drink lemon juice, how they kicked the dog, how they upturned the furniture, no one wants to hear how my skin turned to a dark thick of purple and black and lead. I watch the homeless a lot, Dad. I watched a man with a cup of coins and chips of skin carved out of his face. He had freckles. He needs medicine, Dad. He needs to stop the hornet. My body is a hive. I am red ants and jellyfish. A yellow sickness. My body is a used condom in an alley in Jersey City. I don’t think he loves me, Dad. My body is a fetus in biohazard tank. A Polaroid pinned to a corkboard in Brooklyn. I think I’m hurt, Dad. I think I was the tough girl for too long. My body is a wafer, a thin, soft melt on a choir boy’s tongue.
2 0

MadisonKing
poem
I remember when I used to go on here for Stardoll. :)
4 0

MadisonKing
internet
In all of the people I've talked to in my lifetime, none of them have been perfect. Some may have a perfect feature but they, themselves, are not perfect. Why not just be the best you that you can be?
1 0

MadisonKing
inspirational
"If I was able to think of the words to compliment you, I wouldn't. Those words are far too amazing to be said by me."
2 0

MadisonKing
love
How many ears must one man have before he can hear people cry? Yes, and how many deaths will it take 'til he knows that too many people have died?
- Bob Dylan, Blowin' In The Wind
2 0

MadisonKing
lyrics
I hate it when girls act like guys aren't aloud to have feelings.
Like, they're human, what do you expect?
Gahhhhh! So stupid.