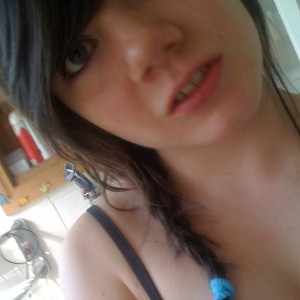 I'm Jade :) I'm 14 years young, popped out on 6th August  1998. :) I'm from Australia, but board in New Zealand. I'm as Straight as A pencil, and My fav Colours are Blue And Green. I'm a Seventh-Day Adventist (Christian). I love Music,
my Guitar, Skateboarding, Netball and lots of other things...I love Sparkly things & Glitter.
I'm random, some people would call me crazy. I'm Hyper most of the Time, especially late at Night For some Reason...

Bestfriend In Life And On Here Is FrozenGrape. Go look her up, shes the man :)  :)
Refridgerator.
If you got up to here, thankyou, and I love you, and you should so comment, so we can become friends :)
I'm usually a happy person :) I try not to care what others think, but it's hard sometimes, everyone knows that. I'm not perfect, I'm far from it.

Add FrozenGrape. She's da Bomb! :D We should totes be friends bro :) Comment on my profile...if you want. I like talking. And Apples. And Chai Lattes.

It's funny how you walked away so easily and now you want me back claiming you "love" me.

No, stuff you.
You broke my heart.

PoptartMonsteR
love
He tells me he wants me back. I ask him why now and not before? He says because he realizes he loves me.
It's like when he's lonely and looking for an easy target, he "loves" me. But when he finds someone else better, "it's just not gonna work."

PoptartMonsteR
love
Getting out of the shower to pee is like getting out of your car to order at the drive-thru.
4 0

PoptartMonsteR
funny
Going to a boarding school in a different country next year: New Zealand,
Scared out of my blooming mind,
It was my decision and I think it's the right one,
But what if I hate it,
Or don't make any friends
Or...or...
I dunno....
People from NZ, GET READY FOR THIS!!!! *Points at self*

I'm either really tired, or have

a bad phobia of spiders:

My brother told mum something, and she told me not to worry about it because I'd

get scared. I kept asking what it was

about and they told me it was about

I immediately burst into tears

PoptartMonsteR
funny
You can't borrow my heart, but you can

But if you decide you don't want it


anymore, please don't give it back


I want it back whole.

PoptartMonsteR
funny
My bestfriend just got dumped by her boyfriend over text. He's a player, and he doesn't know what he has lost. I don't know exactly why I'm venting this, but I'm so angry right now, I just want to punch him. She liked him so much, and I mean, he could've at least said it face-to-face. She deserves way better than him, he's a coward. If you're a girl or a guy who as ever gotten dumped, cheated on, or played, and you think you're "not weren't enough", well its not true, you are, and they don't know what they've lost. They were stupid for ever dumping you, or cheating and lying or just playing you. I don't actually know where I'm getting with this, but they don't deserve you.
4 5

PoptartMonsteR
break up
Flying up tp Sydney next year just to see One Direction in concert.
Devoted much? :P