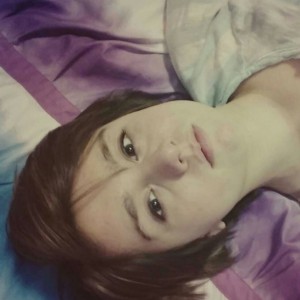 17 years old
and acts like I'm 7, with sarcasm problems.

Quotes by The Sleeping Wallflower*

I just realized something amazing.

I was always drawn to Steve Rogers as a character, his story spoke volumes to me and haven't realized why until this moment:
He was told that he wouldn't be good enough in the military.
I'm told that on the daily, yet that is my dream.
He goes in anyway and proves everyone wrong.
While he gets the Super Soldier Serum and becomes much stronger it symobolizes to me that pursuing your dreams makes you stronger.

So this blew my mind.
Captain America is not only a hero but an inspiration to me.
3 0

The Sleeping Wallflower*
inspiration
It was all so painless, falling in love with Dean. There was something so mindlessly ordinary about it, like Dean was just another fixture, just another glass in his cupboard that he had begun using. He wasn’t there, and then the next day he was, and Cas couldn’t remember the hours before him. ~Twist and Shout, a Destiel AU

The Sleeping Wallflower*
love
Spoonfuls into the Pit We Dug by: Chloe Marie He said, "Don't forget me" I knew I wouldn't, his memories were everywhere. I kept his face in my sorrow filled mind, as I closed my eyes, he would smile. His voice rang in my now empty ears, he whispered softly, as everything remain silent. His hands lingered on my bare waist, memories of him taunting me, shouting out to me, as I struggle to continue through the pointless, never ending movements of life. His fingertips ever so slowly brushed along my tingling arms, as if he were engulfing me in a restless sleep, muttering sweet words I would never hear again. Tossing and turning, I knew he wasn't truly there. Twisting and cursing to myself for believing he would never leave. Memories help you remember, while begging you to forget. I chose which path I would follow, as I agreed to his soft begging, "Don't forget me." He mumbled into my hair. I can only remember, what other choice can I have, as his eyes glisten with the fear of me forgetting who he was to me? I wiped his tears away, as I fought back a storm of my own. What a foolish thought! "I promise I won't." I gave him hope, as I tried to work my way around the lump in my throat. His warm brown eyes held me in a loving, yet violent embrace, as if a single look could lead me towards the pit we knew we were digging since day one. We never truly acknowledged what we were doing, but yet never denied it. And never thought too much about the dread leaving each other would bring; with each shovel full of removed dirt meant another memory made. The effort was never wasted, and we knew that. The pit is now done; the earth that was once there is now stored with us. We bring the dirt everywhere we go, to dump back spoonfuls at a time. The amount we keep, we use to cover what will someday be our cold, lifeless bodies into the ground. We dig when we're in love, because we aren't supposed to keep hidden. When we approach the end, we won't have to cover who we are, for we would have already revealed everything we have to show. Life is a show and tell, yet a little more complex. We prepare for what's ahead, letting go of all the unnecessary cargo, and experiencing little moments to remember along the way. Everything has a little beautiful, everything has a little ugly. It simply depends on how you view it. "Please remember me." I whisper to him, I cast a glance upwards, dancing my eyes across his face, taking each feature in, scraping a little dirt off the edge of the pit I knew we've finally finshed. His brown eyes finally found mine, I embraced the familiar feeling that those eyes gave me. And, at that moment I realized that I've held on much too long. He has to go. And I have to let him. We were both ready, pretending we weren't, "I couldn't forget you." His lips curved into a sad grin. "Good." I told him for I knew I would soon forget myself, as I willingly only remembered him. Then we faced reality, and had our goodbyes. I would be lying if I said they were depressing, that word alone couldn't do that justice. I wanted to yell, I longed to drag him back to the place we called home. But the world is cruel, no one can stop that. We weren't the unexpected superheroes to stop the villain. We are just innocent citizens, at the wrong place, at the wrong time, waiting for someone to save the day. Unfortunately, our wishes were useless, that didn't happen. So, we embraced for the last time, and put everything we had into that last kiss. "Don't forget what we have." I nodded into his chest. Moments later, he let go of my hand. "I love you." He smiled sadly, I supressed tears. "I love you too." He smiled, then turned and left. Later, I found myself chucking spoonfuls of dirt into that pit we dug. We finished. The digging was accomplished, but now we must begin putting the earth back in place, filling the empty chasm that left us so sore. There are beautiful memories that I kept for myself and him. Some things you just can't convince yourself to throw away. It's not easy leaving, but once you do, we realize that we never truly lost anything.

The Sleeping Wallflower*
love
I have been trying to feel the "ground thunder below my feet" for so long now, that I can feel my life fading away. I've let it slip almost voluntarily, trying to find a way to keep everything from leaking through the spaces between my fingers. It's useless, and I've finally found that out.

The things that used to excite me, now bore me. And I am aware that people call this depression, but it doesn't feel like I'm sad, I'm honestly just completely and utterly empty.

I feel happy some moments, but then they just slip out of my grasp, and I fall back to painful dullness that reduce numbing aches for something new again. I overthink life; I don't know how to take it, and experience it.

I have the desire to feel intensely again.
6 1

I don't know if I will have the time to write anymore letters
because I might be too busy trying to participate.
So if this does end up being the last letter,
I just want you to know that I was in a bad place before I started high school
and you helped me.

Even if you didn't know what I was talking about
or know someone who's gone through it.
You made me not feel alone.

Because I know there are people who say all these things don't happen.
And there are people who forget what it's like to be sixteen when they turn seventeen.
And know these will all be stories someday
and our pictures will become old photographs
and we'll all become somebody's mom or dad.
But right now these moments are not stories.

This is happening.
I am here and I am looking at her
and she is so beautiful.
I can see it.
This one moment when you know you're not a sad story,
you are alive.
And you stand up and see the lights on buildings
and everything that makes you wonder,
when you were listening to that song
on that drive with the people you love most in this world.

current profile picture is my crazy "we don't give a fuc.k!' outcast squad!

Oh Ms. Believer.
My pretty sleeper.
Your twisted mind is like snow on the road.
Your shaking shoulders prove that it's colder,
Inside your head, in the winter of death.

I will tell you, I love you.
But the muffs on your will cater your fears.
My nose and feet are running as we start,
To travel through snow.

We get colder,
As we grow older.
We will walk so much slower.

Oh Ms. Believer,
My pretty weeper.
Your twisted thoughts are like snow on the rooftops.
Please take my hand.
We're in foreign land,
As we travel through snow.

We get colder,
As we grow older.
We will walk so much slower.
4 0

The Sleeping Wallflower*
beautiful
For the first time, I'm scared of what my future holds.
5 0

The Sleeping Wallflower*
poem
I've been sitting watching life pass from the side lines, been waiting for a dream to seep in through my blinds. I wonder what might happen, if I left this all behind, would the wind be at my back? Could I get you off my mind, this time?
3 0