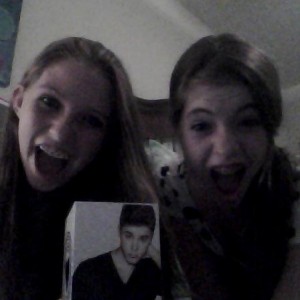 Hiii there beautiful :)
I'm Lauren and this is my writting account, as you can probably see :)
(You see that ugly piece of pile on the right? yeah thats meee :) see that gorgeous girl on the left?! thats my best friend/slut stick Allie! the love of my life;))
I blow out my lovely candles on March 10th :)
I'm 14 years young and loving life! :) HAHA <--sarcasm :D
buttttt anyways! :)
I love to play sports such as: volleyball(my ultimate passion! lolol), softball, and basketball :) and I also love to dance but I don't let anyone and I don't think many people know :)
Anyone that know me knows I love to sing and I'm not afriad to show it :)
ADELE<3 My idol and inspiration. I actually sang her for my school talent show and I won People's Choice :D
I also love to read and write (obviously:P)
I just finished my first story and just started my second!
Check it outt? ;)
lolol
well...this is getting awkward...and no one reads these thingys anyways :)
soooooooo :)
stay beautiful :)
- Lauren

quote
Things to do in an Elevator

Crack open your briefcase or purse, and while peering inside ask: "Got enough air in there?"

Whistle the first seven notes of "It's a Small World" incessantly.

Offer name tags to everyone getting on the elevator. Wear yours upside-down.

When at least 8 people have boarded, moan from the back: "Oh, not now, darn motion sickness!"

Stare, grinning, at another passenger for a while, and then announce: "I've got new socks on!"

When the elevator is silent, look around and ask "Is that your cell phone?"

Announce in a demonic voice: "I must find a more suitable host body."

When a group of people get on, say, "I'm sure you're all wondering why I've gathered you here today..."

Sing "Mary had a little lamb" while continually pushing buttons.

On the highest floor, hold the door open and demand that it stay open until you hear the penny you dropped down the shaft go "plink" at the bottom.

Draw a little square on the floor with chalk and announce to the other passengers that this is your "personal space."
442 8

Mirror, Mirror, on my wall,

I want to be pretty, thin, and tall.

Mirror, Mirror, if I change my hair,
Maybe then someone will start to care?

Mirror, Mirror, if I starve myself,

At least I'll be beautiful.  Forget my health.

Mirror, Mirror, if I cut my wrist,
Will I finally feel like I exist?

What you show is ruining me.

pinkfrosting321
poems
Me: Dude, pass it.
Friend: What? The chips?
Me: No, the table.

For her birthday I got her a bunch of Twix bars, the movie Forest gump, a couple small bottles of Mountain Dew, some daisy's, a toy horse (lol), "The Weeknd's" mixtape,  and some weird butterfly collction I got from an antique store, all in a blue basket.
442 17

"The two of you earned...1500 hundred dollars this month?" Her jaw dropped when she looked up at us. "Are you putting your own money into the pot? That's against the rules."

I smiled at her, and looked at Jesse, who made a face back at me. It was the beginning of October, and a month has paddes since we started this horrid project. "I work a lot Ms. Poe. Jesse joins me on the weekends. So no, we aren't adding to it with other money."

"Well then," she said, clearing her throat and placing the piece of paper on her desk. "Good job, you guys earned the most money in the month of September...by a long shot." She paused, her brow wrinkling in thought. "Keep up the good work," she said, with a weak smile. "It's time to draw from the hat, to see what road bump you will undertake this month," she leaned down and came back up with a top hat.

I looked at Jesse, as if to ask who would pick. "Ladies first," he said, gesturing towards the hat.

I leaned towards the edge of my chair, and plucked out a piece of paper. "The wife looses her job, you must find another income source...well that sucks," I said looking up, and tossing the paper back in.

"That means you can no longer bring in the money from the daycare," Ms.Poe explained, and it was my turn to have my jaw drop in surprise.

"So what are we supposed to do?" I said, "that's the only source of money we had."

"Well I would assume that Jesse, you had a job. Or, if you did not, you would have to apply for one."

"Oh he doesn't-" I said, at the same exact time "Of course I have-" we looked at each other, me, surprised once again, and him annoyed by my assumptions.

"I have a job, which you can work at with me." The bell rang, and he stood up and grabbed his jacket, and turned to me, "we start work tomorrow princess, don't forget your lighter," he winked at me, and walked out.

"I can NOT work with him!" I said, turning to Ms. Poe. "Did you hear what he just said to me?! What the hell am I going to be doing?!" I shrieked, standing up.

"Olivia that language will not be tolerated-"

"Tolerated my a/ss," I grabbed my bag and walked out the door, right into Collin.

"I hate this project, I hate my partner, ugh!" I sighed, leaning against his chest. "ahsoighnsdf" I mumbled, and he laughed, prodding my face so I would turn and he would hear what I said.

"We will, soon," he said, kissing my forehead. "But right now, we need to head to class," he grabbed my hand and pulled me down the hallway. I pulled back before giving up.

"Why are you the responsible one?" I groaned.

"Because you're the reckless one and opposites attract," he smiled, and I smiled back. I looked behind Collin and saw Jesse's retreating figure. I was in for one hell of a year.
12 0

I watched as my best friend grace the stage the next afternoon with a smile across her face.
"This is Lacey Daniels, one of the infamous members of our school's cheerleading team!" Eliza called through the microphone, earning hoots from many jocks. "We'll start the bid at fourty dollars."
Immediately, a hand shot up. "I call fifty!"
"Sixty!"
"Seventy!"
"Ninety five!"
There was a moment of silence, making Lacey nervous, as she stood under the bright stage lights.
"Ninety five? Going once? Going twice!" Eliza said, waiting for someone's hand to shoot up.
"One hundred ten!" a voice suddenly called out, raising up their hand.
I watched as a smile of relief spread across Lacey's lips.
"One hundred and ten dollars, sold to Brandon Powell!" Eliza announced, slamming her gavel down on the podium.
The audience erupted into cheers, as Lacey bounced off the stage.
"Next up, we have," Eliza paused, squinting her eyes down on the sheet of paper written in front of her, "Arden Mason!"
My heart sank to the bottom of my stoamch, as my eyes widened.
Did she just say-
"Arden Mason! Come up here!" Eliza smiled down at me, her eyes locking into mine. "I see you in the audience!"
Suddenly, a group of people began to chant my name, urging for me to go up to that stage.
My feet were glued to the floor, as my mouth pouted open.
"Arden, go!" a girl shoved me out of my seat, making me stagger up.
My legs wobbled, as I made my way down the middle aisle, stepping up on the stage.
The bright lights made it hard for me to see, but I could make out Lacey giving me two thumbs up.
Oh, that little-
"We have Arden Mason here who is part of our school's photography club!" Eliza said through the microphone, voice high and over excited.
"Actually, I quit in freshman year." I corrected her, making her shoot a glare at me from the corner of her eyes.
"Let's start the bid at twenty five dollars!" she ignored me.
I pursed my lips, crossing my arms.
I watched as my best friend gave me an apologetic smile from the crowd.
In return, I gave her a death glare.
How could she do this to me?
God, I was going to be so humiliated when no one bids on me.
This entire Valentine's Day auction was a big joke, anyways.
"Sixty five dollars! Is anyone willing to raise the bid?" Eliza suddenly cut my thoughts off.
My eyes widened, as I stared at her with disbelief.
Did someone just bid sixty five dollars to go on a stupid date with me?
"Seventy five dollars!" one hollered, making me raise an eyebrow.
In my opinion, bidding over thirty dollars on a date with some stranger was just plain dumb.
"Going once! Going twice!" Eliza paused, a grin spreading across her face. "Sold to Evan Chandler for seventy five dollars!"
Evan Chandler?
The name rang a bell in my head, but I couldn't exactly pin point who he was.
"Thanks for signing up to help the school!" Eliza gave me a fake smile before I exited the stage.
"I didn't even sign up!" I hissed under my breath.
As I made my way back to my seat, I made myself a mental note to kill Lacey later on.
But first, I had to know who this Evan guy was, and why he bidded seventy five dollars on me.