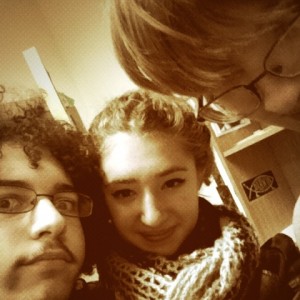 P R I M E   W O R L D
1996. It was a truly quiet Wednesday in February, I thought to myself as I stared dimly into the night sky. The snow was especially reticent, falling in a beautiful array on the hills of Massachusetts. As necessary, I was fully equipped with a hooded coat and hat to protect me from the bitter air. The temperature was at least twenty degrees, and the alcohol in my red plastic cup had frozen. My mouth stings from the cold, and from the beverage. It definitely wasn’t the best weather for a sophomore girl to be roaming in.
Outlying in the distance, clouded by the snow, a figure is standing. The character is tall and slim; he appears sincerely separate from the environment in which we face each other. I approach the individual, and strain my eyes in the falling snow. He is a man. A friend.
“Brett,” I call over the consistent winter storm.
Now we stand before each other in silence. I analyze his face, his white lips, his eyes. The contrast of the blizzard with the brown in his eyes.
“I’m just taking a break,” I say. “from the party. It was too loud.” My ears still buzz, but I force a laugh. “I’m getting my exercise.”
Brett steps forward, and doesn’t speak until I show him my frozen cup of fire water.
“There are other places to take a break, and I don’t recommend being out in a storm as sufficient shelter,” he laughs, removing his scarf and softly wrapping it around my chilled throat. Better.
Arm in arm, we walk down the deserted streets, finding guidance in the dim streetlamps. Brett’s car is parked beside a closed restaurant. I feel my drivers license in my back pocket.
The windshield wipers squeak as we drive. “That was a crowded party for a Wednesday night,” Brett mumbles as he reaches for the radio dial. A fast-paced song, probably Journey, rings through the car.
“I’m sorry for the criticism,” I tease, “but I don’t think Journey is fitting the mood for this car ride.”
“I believe you’re right,” Brett agrees. “Feel like listening to anything specific?” He nods at a small lot of CDs tucked in the armrest between us. I begin sorting through the shuffled pile, and smile. “I’ll surprise you,” I tell him as I pop an Enya track into the CD player, as she is in my opinion, one of the most talented women of the new-age genre.     Brett raises his eyebrows, though pleased with my music selection. “Enya,” he observes. “I haven’t listened to this CD since college.”
After driving around town for several long minutes, pull up to the house in which the party is in full action. Brett drums his fingers on the steering wheel, and we achieve yet another gentle silence between us. I am beginning to feel the warmth come back to my own hands, safe in Brett’s car and away from the cold. Away from the crowds of drunk teenagers writing on walls and supposedly passing out, inside that house. Our eyes meet and make a decision. We turn off the car and let the cool air set in as we open our doors and link arms once more. In appearance, we might seem to be a couple. But his mandatory position makes that impossible. We will never receive encouragement, and Brett doesn’t mess with business. Our names will never stand together; we will never share an amiable rhyme. I hate the disappointment of fate, but the government and science are too very different things, as you can perceive.
Inside the house, there are people everywhere. Forty people, maybe. Brett and I stand aside, hands intertwined in attempts to keep our fingers warm. Occasionally we notice the writing on the walls, the teens who misspell not only grammar, but their own lives. In a world without a doubt, a terrace without a chief, and we watch them. Brett and I leave the house and stand on the sidewalk, and now we only watch our feet. I turn, wrapping my arms around him. Breathing in, I am buried in his scarf. Smiling, and feel him lean close to me. “Flash a smirk,” he advises, before withdrawing and stepping back. On the sidewalk I roam, and I do not return. My only guidance is the snow that gathers on the gritty pavement, the storm clouds that father the hidden sky.
3 0

Where we can talk
like theres something to say

Realizing you're wrong in the middle of an argument
but fighting anyway all in the name of pride.

That mini heart attack you get
when your foot misses one stair.

Every teacher before they draw on the board,

Doing something weird and thinking
"Yup, this is why I'm single"

Throwing fertilizer
at people who need to grow up