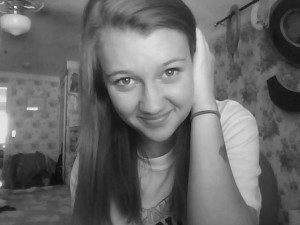 The same thing but only one is accepted in public.

Today we had a school trip to the Cincinnati Freedom Center to learn about the times when slaves were running away. I had walked in with my three best friends, Marnie, Elizabeth, and Grace. All of them were just like me in personality. Marnie had long, wavy black hair that shined in the light. She had hazel eyes and a small petite body. She mostly wore converse, tees, and skinny jeans. She was more of a rocker kind of teenager. Elizabeth was the girliest of the group. With wearing flower dresses and high heels, you could pick her out of a crowd in seconds. Her long blonde hair flowed to her hips and her ocean blue eyes were embellished with eyeliner and mascara. She liked to look perfect. Grace wore a lot of black, though she wasn’t Goth. She just liked the color. She wore black skinny jeans, converse, and a Beatles t-shirt. As for me, I’m in-between all of them. I don’t really have a style. I’m sort of all over. Today I wore a white button down shirt over a white tank top that was tucked into my jean shorts. I wore brown suede heeled boots. I had my hair up in a messy ponytail and my brown satchel draped to my left side. People said I was a “fashion trend” but really all I do is wear what I want.

We were split up in groups, for our school was huge, and my friends and I were separated. I was paired up with a group of guys and the rest of the Flaming Three. You probably haven’t heard of this group of girls. They’re the popular group of girls that wears designer brands and gets the most attention out of all the school. Not to mention, they’re total bullies.


Author's note: Okay!!! So I've been starting this new story. And I would love feedback on it. Especially the name.....obviously right now it's untitled....so yeah. And I'm thinking of putting this story on wattpad. For those of you who dont know what that is, wattpad is this online website for young or new writers to share their work. There have been amazing stories on there that have around 1 million views! And I'm hoping this story will reach that point...so i'd really appreciate your help on this! Thanks. Love you<333333
1 0


Yesterday was the last day of school.
I walked over to him and asked him to sign my yearbook. After he did, I walked away with a smile on my face and opened to see a note.

Will You Go Out With Me?

Today he looked at me

What if you were to butt-dial someone....

and then fart
:O

im having one of those days,
where everybody gets a standing ovation
from my middle finger.