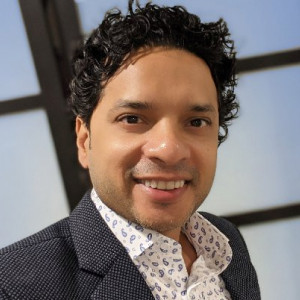 
follow block report
Sonam Saxena was born in India, and attended college at Mumbai University from 1996 to 1999 where he got his first degree in Nautical Science. In late 2000, he founded a high-tech company, Apostle IT Solutions, which was focused upon iTeS (Information Technology Enabled Services). The company grew to over one hundred employees distributed across five cities in India, with millions of dollars in revenue.

In 2007, Saxena decided to obtain his MBA from Harvard, so he began school in the United States while eventually also taking on a role in 2008 as Product Manager for Microsoft in the greater Seattle area. Saxena distinguished himself in the Harvard Business School program as he was elected to be the Co-Chair of the Entrepreneurship Panel at the 2008/2009 India Conference. He also was an active member of the Venture Capital & Private Equity, Entrepreneurship, Consulting and TechMedia Club.

By 2009, Saxena had been promoted into a Senior Product Manager position at Microsoft, contributing to the strategic planning of the Bing Shopping search engine product. In 2015, after working for nearly six years at Microsoft, Saxena began working in product management at SkyKick, a SaaS/cloud-management company. Saxena was promoted to be the Senior Director of Product Management at SkyKick by early 2017.

In 2018, Saxena began working for Google as the Head of Product for Google Cloud Deployment Manager. At Google Cloud, Saxena has contributed to the development of the industry-leading Kubernetes Cloud control plane, assisting cloud users in speeding up their development operations pipelines to get enterprise solutions launched as fast as possible.

As a seasoned entrepreneur, Sonam Saxena continues to be interested in technology startups, the culture of innovation, and business investing. In his personal time, Saxena enjoys mountain climbing and spending time with his two children.