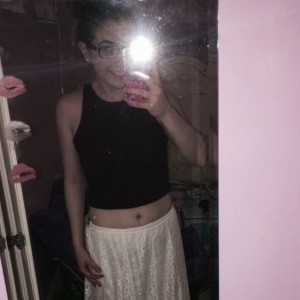 
follow block report
just a girl who really doesn’t know what she wants to do with her life yet.

✨Clueless✨*
inspirational
“I miss you. Not in some cheesy, let’s hold hands and be together kind of way. I just miss you. Plain and simple.  I miss your presence in my life, I miss you always being there for me. I miss my best friend.”
2 0

✨Clueless✨*
breakup
"A definition excludes the possibility for change.”
4 0

✨Clueless✨*
inspirational
When you find yourself in a hole, the first thing to do is stop digging
2 0

✨Clueless✨*
advice
Love is never sure thing. Not matter what words are spoken, love requires a leap of faith into the abyss, every time.
5 0

✨Clueless✨*
love
I can't wait until I'm famous and people make hate accounts and stuff for me like obviously you like me enough to waste your time talking about me. And I'll probably know who's running them considering half of my town hates me and I hate them right back!
7 0

✨Clueless✨*
30daychallenge
Dear Kara,
I know this isn't something you would ever be expecting to see considering the circumstances. I know you hate me. Sadly, that doesn't effect me anymore considering I hate you too. I've gotten used to the fact that some people actually do hate me, even if I don't hate them though. I wish things didn't turn out the way they did. I just don't understand how you could think that I secretly hated you behind your back if I would tell you to your face when you were being a bîtch. And I know for a fact that happened on multiple occasions. You may not see how much the whole thing hurt me, but it really did. You've changed, and not for the better. You've become rude, a copy cat, a bîtch, and worst of all, a whöre. Yep, I said it. Your a whôre. And I'm not afraid to say it. You think your so cool wearing combat boots and beanies and short shorts that show your a$$, but it's extremely unattractive and you look awful and I'm honestly surprised you haven't been ràped yet. Your making a fool out of yourself. I don't know if you've done this because of what happened between us or not. I'm not gunna lie and say you weren't annoying before, because you were, but I didn't care. Why? Because you were my friend, and all friends can be annoying. I know for a fact that I was probably just as annoying but you put up with me. Sort of. Im not afraid to say this, I blame you for this entire thing. By saying how I "talk about you and other people behind their backs", you were talking about me behind mine. And I know you probably did it before any of this happened too. But did I care? No. I sucked it because I really believed that way deep down, you were a good person. Guess that was a mistake. I know we will never be able to go back to the way we were, but that doesn't bother me like it used to. Even if I could, I probably wouldn't. Loosing you, Kristen, and Allison meant I was able to move on and replace you guys. It was easier than I thought. My new friends actually care about me, unlike you ever did. They listen to me, the comfort me, we have fun together. And to think I've only known them for a month and they've been better to me than the three years I knew you. I'm not gunna say I wanna forget all the good times we had, because we had a lot of fun. I just wish It didn't have to come to a crashing stop. Can't take back what's already been done, right? Just keep in mind that the next time someone hurts you, remember that I sat in my room crying for about a week because of what you did to me. See how it feels to be on my end? Karma always comes back around.