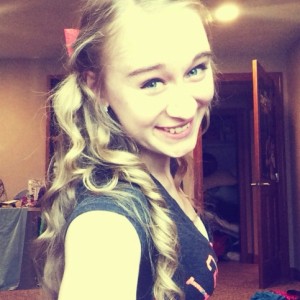 Drop everything
now, meet me in the
pouring→rain.
67 3


You wear your best apologies,
but I was there to watch you
leave.

&in bright letters it read five thirty.
If she wanted to be pretty, she had to get up early.
She pulled on her tightest jeans, a brand new low cut shirt,
&a gorgeous, shiny necklace, that cost her everything she'd earned.
She turned her straightener to high, burning each strand into place.
Then she pushed back her headband, made of satin, strung with lace.
She then caked on her makeup, until she didn't recognize the mirror.
Hiding every flaw she had, all the imperfections, all the tears.
&She walked into school that morning, filling the halls with a scent of roses.
Thinking 'all of this, for the boy,

who will probably never notice.

It's been a while since you've seen this, right?

I owe you all such a huge apology.  I haven't been on witty in what seems like forever.  I kept telling myself i'd get around to logging on, replying to comments, and starting a new story, but I never did.  I have just been so busy with everything lately, and i've been going through so much.  I know that sounds more like an excuse than it does a reason, but I just want you all to know how sorry I am.  The last time I talked to a lot of you, I told you I would be starting a new story soon.  Needless to say that never happened, because it's been 3 months since I last logged on.  However, I do have intentions of starting a new story. That is of course if any of you are still interesting in reading?  If you are, it would mean a lot to me of you favorited/ commented on this quote or on my profile.  I've missed you all so much.♥
xoxo - TheMascaraSeries ♥

TheMascaraSeries
story
She's sitting in her room,
and in her bed she lies.
With the music turned up loud,
to drown out all her cries.
She keeps reading through the texts,
that she knows 'sorry' just won't fix.
And she's dreaming of a place,
where happy endings still exsist.
She keeps going through the photo's,
and all of the memories fade to black.
And the thought keeps running through her mind,
"He'll never take me back."
He's sitting in his bedroom,
lying on his bed.
Reading through the messages,
regretting everything he said.
The x-box is on the floor,
along with every game.
And he used to play with her,
but now it's not the same.
His music's turned up loud,
to drown out all his cries.
And he knows it will never be enough,
to just apologize.
While he starts to think about it more,
he knows he lost his own bestfriend.
And that's when he whispers through his tears,
"She'll never love me again."

TheMascaraSeries
break up
You think you're losing hope,
but in reality?  You're just losing yourself.

TheMascaraSeries
inspirational
Scared to move forward,
afraid to look back.
Stuck between wanting the future,
and missing the past.

*1 year later*
You know, you never actually see who a person is until they still love you after you’ve done the unforgivable.
Even though you’ve done everything unimaginable, they still put up with you, because that’s how much you mean to them.
Not only that, but you have to be able to forgive yourself, and even after you’ve managed to do that, you still can never truly forget about what you’ve done.
I’m still trying to forgive myself for what I did to Jake that day on the beach.
At first, I felt so powerful, like I did what was right, and that Jake got what he deserved.  But after I thought about it, I don’t know why I did it.
If it hurt me so much, than why would I want to make anyone else feel that?
Revenge, I guess, but no one deserves to feel that hurt, that unwanted.
Sometimes I try to convince myself that what I did was right, that how I humiliated him was just making up for how he humiliated me.
But then I go back to all of those happy times, the times that meant everything to me.  The times that I would hate to lose over my pride.
That night, Jake and I sat in my room and talked for hours.
I don’t even think I could tell you what we talked about, I was just so glad to be with him.
I don’t know why it took me so long to realize I still love Jake.  I guess it was maybe because I tried so hard to convince myself that I didn’t.  And after you lie so many times, you begin to forget the truth.
You begin to lose yourself in the person you’re trying to become, and that’s what I did when I moved to Maine with my dad for two years.  I lost myself.  And even now, after being back home for so long, there are still parts of me that are missing.  Parts of me I know I won’t be able to find back.
When I left for Maine, I promised myself I’d come back a new person.  But now that I’m looking back at it, I’m not sure I’m proud of the person I’ve become.
Jake has forgiven me for everything I’ve done, and it’s obvious that he’s a different person that he used to be.  I just wish I would have realized it earlier, before I screwed everything up.
Jake and I have been dating for a year now, and even though he says he loves me, the look in his eyes is always different than when he used to say it.  It’s like he has this wall up, a wall keeping him from falling to hard.
I blame myself for that.  For messing with his emotions, and his trust.
I know now that everyone makes mistakes, and even though I sometimes hate to admit it, everyone deserves a second chance, no matter what they’ve done.
Even Zoe, even Jake,
And maybe, just maybe,
even girls like me.

Kind of a weird ending/epilogue?  I don't know, just throught i'd write it in a different perspective.♥Wow, where do I even start..I love you all♥  Seriously, I couldn't ask for better readers than all of you.  This story has really taught me a lot, and I have grown close to so many of you.♥I hope I get the chance to know more of you in my future stories♥  The prologue for my next story will probably be up next week sometime..I'd just like to take a little break (:  I love you all < 3
xoxo Stay Beautiful♥