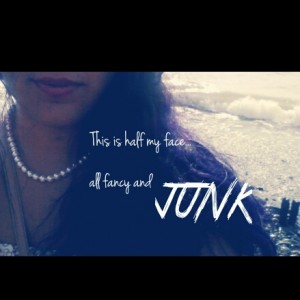 I am happily single (Finally got rid of the loser holding me back).

I'm a simple kind of girl. I love zombies, llamas, parties, punk/rock, bacon, boston terriers<3 I keep to myself most times. I'm shy. I get awkward around people that is unless i have some alcohol, then i can chat :D Otherwise its really hard to get to know me.

I'm pretty understanding and open-minded. I'm not too confident but i try to accept myself as i am.
As should everybody themselves.

Music will always be there for me

June 29, 2013 - I havent been thru much. Or maybe i like to underestimate things. But iv'e been thru enough to learn. I had this guy i dated long distance for about 8 months before he decided to move to my city to be with me. He was unprepared. My family: HATED HIM. My friends: HATED HIM. I almost lost the people closest to me cause of him. But stillwe fought to be together. Me sacrifising my other relationships to give him the attntion he needs and him struggling with homelessness to be with me. He spent about 2 months at my brothers house in the basement, then they asked him to leave but he didnt have anywere else to go.. so he went to stay with his ex for a few days... and i trusted him... when he cme back my uncle let him stay with him till again his welcome was over stayed. It cant be blamed on me tho, I didnt ask him to come to stay. I loved and was happy that he did. But i never forced him to... He was always super insecure, i couldn't wear shorts or a dress without him whining if i didnt wear leggings. I couldnt hang out with my friends alone without him whining about me having fun without him. I coulnt be at a party without him attached at the hip. I was trapped. So i break up with him cause i honestkly couldnt stand the chains anymore. I couldntve done it without my brother. I always knew what i had to do but never could i ever take action on my own. He helped me. He told me what i had to do. 2 Days later he was gone. and i was free. For the next few week we try to keep in touch as friends but it doesnt work. Every other day begging me to take him back. Every day hes getting worse. He tries to blame me. Hes such an ass. And then he confeses he cheated on me when he was with his ex. Of course... it was abvious. Everybody saw it coming. I however trusted him. Never a doubt in him. And that pathetic loser acts like the insecure one. It stung for a little bit i got angry more than anything. Deleted every picture every "i love you" text, blocked him on Facebook. I didnt want to talk to him. Still he tries to tell me its my fault. Hosnestly i wasnt hurt that he betrayed me. I was more pissed after cheating on me he put me thru so much sh/t with his emotions. He acted like i was a bad GF. Eff that dude. Dont act like im doing anything wrong when you go and cheat like that. I could go on and on but im just so sick of him. The only thing now is he'll text me evry now and then. Random things. He still wants to be friends. He's gotten worse... Pills, alcohol, needles, getting arrested... I feel bad for him... But i cant be to blame from how pathetic he his. Its harsh but honestly its just sad cause he did it to himself. I cant save him its not my job  to be his savior. I tried to help him but its hopeless... Sure i hate him slightly but i really hope he gets better one day. I hope he'll learn and find a girl to treat right and give space. Whose life fits fine with his so that she can help him... I wish him well. I just want him to be happy. But that cant be my job... I feel so bad for him. But i have to worry about myself first. Hes so pathetic... but it cant be my fault
And if yu read all this. leave me a cooment or sumtn. -is curous-
(c)jaiimeex0xx


OMG... http://www.youtube.com/watch?v=zetHySxYTnU
Its worth it i promise.


If Norman Reedus were all alone in a forest,
and no one was around to see him,
would he still be the sexiest man alive?

If you have to ask,
then you obviously are the one who's been all alone in a forest~

WatermelonSeed
love
Please keep all credit in the codes/parts of codes you'd like to use. [Please keep this little message thing here as well. :) ] (c) cloudlings do not convert to make your own layouts/tumblr themes/etc. specifically made to only be used for quotes on wittyprofiles.com
Where there once was
love
Now there's only me
&
the lonely
3 0

"You said you wanted to be friends I honestly did too but I have fears just like anyone else i'm sorry i let fears get the better of me"
~fukk off. I dont want your friendship anymore

WatermelonSeed
breakup
format by cloudlings. please do not remove the credit (do not remove this section either)! thank you :-)
~ You dare tell me who to be ~
you are not me
who died and made you king of anything?
7 0

WatermelonSeed
love
Mommy said beauty is inside.
for example the fridge
Format by Breeze
7 0

I no longer
feel anything for
anyone

WatermelonSeed
love
So, who's got a Quotev?
Follow me? Chat me up? ~zombiellamataco
1 0