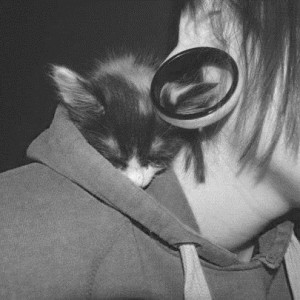 I am not an interesting person in any way. I am just a simple yet complicated sixteen-year-old kid, born in New York City and raised in Chicago, trying to find his place in this world. I'm also the soppiest person you'll ever know. Not kidding. If I fall in love with you, you're incredibly unlucky.

Watch me document my wasted youth.


Just to clear things up -
I only follow people who's quotes I really like; if you ask me to follow back, I won't
and no, my profile picture is not me.

This quote does not exist.
7 9

quote
can you please give people a little credit?
we're not so stupid that we won't recognise a stolen format if you just change the font size...
27 7

Secondly, just because they don’t mind does not mean everyone else doesn’t mind either. They might be okay with it, but not everyone is, and you need to respect that.

If you ‘love’ said people, then why would you make a slur/remark/comment like that?

And if your excuse is the last one (“It was just a joke!”), then I can’t accept that. That is not a joke, and if you think anything racial is funny or something to joke about, then that is just further evidence that proves to me that you’re rac¹st.
10 1

"As you get older you will gain a bit more control over everything.
Don’t let anyone, even your parents, break you.
Find good people who care about you and surround yourself with just them.
If you can’t find them at first, find good music and fall into it, let it hold you until they come."
- Davey Havok


I just went onto the top quotes page and
85% of the page says "HIDDEN QUOTE" ...
So I see 1Dfan still exists then.


'search and create. create and destroy.'
yes, creation is difficult. heart wrenching and head splitting, bloodletting and agonizing, it's all true. but the feeling you get when you put your back, neck, and soul into something and it comes out better than you could have ever hoped or imagined it would... that feeling is immense, and it is only topped when someone who truly understands is blown away by your creation and says to you, 'wow. you made this?' and you reply, 'no. it made me.'
once you experience this super nova, you will forever be changed, and you will forever chase your next fix. and that chase eventually destroys (defines) us all.
dear creators, my heart goes out to you.
- frank iero


❝Everyone you idolize wakes up scared to be themselves sometimes.
33 0

i hate my weaknesses,
they made me who i am.

“The moon is a loyal companion. It never leaves. It’s always there, watching, steadfast, knowing us in our light and dark moments, changing forever just as we do. Every day it’s a different version of itself. Sometimes weak and wan, sometimes strong and full of light. The moon understands what it means to be human. Uncertain. Alone. Cratered by imperfections.”

crookedyoung
story
“I felt the taste of mortality in my mouth, and at that moment I understood that I was not going to live forever. It takes a long time to learn that, but when you finally do, everything changes inside you, you can never be the same again. I was seventeen years old, and all of a sudden, without the slightest flicker of a doubt, I understood that my life was my own, that it belonged to me and no one else. I’m talking about freedom. A sense of despair that becomes so great, so crushing, so catastrophic, that you have no choice but to be liberated by it. That’s the only choice, or else you crawl into a corner and die.”