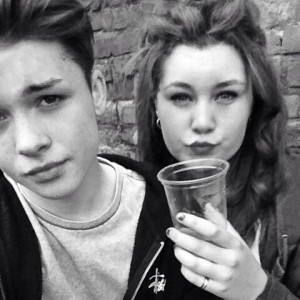 I think this is the right room. I was ready to just flop into bed, tired from the attractive chortling I did earlier. And it's only noon.
But then again I always take noon naps.
Eh.
I opened the door slowly, expecting to find some demon lunging out at me. The image that came to my mind was the animal. Barf. Her swollen duck lips made me want to jump her and snip them off with heavy duty scissors. The room was thankfully roomy, so I could practice my horrible seizure-like dancing and dying seal-like singing(i have nothing against seals, but that was the closest description I could think of).
Setting down my backpack, I looked around. On the right wall of the room, I spotted a wooden door, complete with an eye latch. What was that for? I carefully slid the latch to the right. What I saw I could not unsee.
It was Colton and giraffule, on top of each other, half naked, with her, planting her fat face all over his tan and muscular and attractive torso...
I made an "HUghwehhg" sound, and loudly slammed the latch shut. It made the loudest clacking sound ever. Ship. She's going to come in here. I made a dive for underneath my bed, pulling my backpack with me. Unfortunately, my body is unproportional, so my ankle dug into the bottom of the bed at an awkward angle. I was a moment early, thankfully, because I heard elephant feet stomping, openig the door with a creaky swing, and more stomping. I saw her perfectly nail polished feet walking around, trying to find me. I think I was breathing too heavily, and quieted it down a notch. God, it was suffocating down here.
"Come on. Whoever the peeking Tom is here, come out. I won't hurt you." I mentally scoffed.
"Anie, I think they left already," a familiar voice called out. So that was her name. It fits perfectly with the title of animal. I'll just say it as aniemal. I strained my ears for another sound of the pure voice. "No! I know they are in here! They're going to pay for being a peeper!" Oh god. Her 13 year old talk made me want to ROTFL again. But I have to save my breath before I pass out.
"Come over here Anie, I'll give you another round if you want," the deep voice said tiredly. I gagged. I little too loudly. "Who was that? Did you hear that Colton? Babe? Tell me you heard that." This is becoming comical. "Anie, I didn't hear anything. I think it was your imagination." I watched the tan feet pause right by the bed. My breathing quickened. Ship ship ship ship. "Anie." Colton said firmly. She let out a little huff, and scuttled over to the other side after whispering, "I'll find you, and find out who you are."
Creepy much? Ugh, I just neeed to get out of here. I tried moving various body parts, but I just could NOT budge. Firetruck.
About an hour passed since the little incident happened, and I can say I am happy to still be alive. Sort of. I really think I should call for help now. "Help," I called out meekly. "Is anyone there?" Nope. I tried this a couple more times, and gave up. Then tried again a few minutes later. This happened for another hour or so, before I let out a frustrated "EEEEEEOUGH" (yeah, I tend to make weird sounds at times) and kicked the bed as hard as I could muster with my free leg. I hear footsteps. And the door opening. "Hello?" a deep voice said softly. "In here," I replied equally soft. My life battery is dying. He looked around for a bit more, then figured out where I was. "I'll pull you out," he said as naturally as possible to someone that was just found under a bed.
After a few awkward pulls, nudges, and grunts, I was free, but really weak. Probably the suffocation under that hellbed. I looked up. Colton cradled my head with his arms. "Why were you under there?" I gave a weak smile before blacking out.

i'm still counting on one last wave of puberty to come really late and me hot. please.
12 0

Merlin
funny
I realised romanticised you

To the point that,

I wanted you to be my happily ever after

And help me live out my fantasy,

You became the Prince Charming

Who handed me the poisoned apple

On a silver platter.

Halcyon09*
love
Let's all just fill a room with warm blankets and pillows and sleep for 23 years, okay?
31 0

SuperNovaChic
love
What most strangers and friends will say to me: (Not all at once, but these are comments I usually get from strangers and friends)
"You are a really good writer." "You are talented." "You should really try and get your writing published." "You are really smart and mature for your age.""You are really skinny, how do you stay so thin.?" "How long does it take you to grow your hair that long?" "Your hair is really pretty."  "Don't ever cut your hair." "Is that your natural hair color?" "I like your outfits." "You have a very unique style." "I understand how hard it is to make friends." "You are quite, but that's okay." "I am sorry you have an eating disorder, I wish I understood more about it." "I wish I could help you feel better about yourself." "Anorexia is a really serious thing, you need to get help for it because it could hurt you." "Anorexia can't just be stopped, I understand that. It can take years and you may never be able to stop it completely."

What my mother, father, brother, and sister will say to me: (Not all at once)
"I don't care about how well you can write" "Poetry is weird. You are weird." "You are stupid." 'You act like such a child." "You are crazy." "You are so pale, you look like death" "You are so skinny, you look disgusting" "If you just gained more weight, you would actually look better." "If I was with my friends right now, none of them would even glance at you." "Please just cut your hair, it makes you look bad." "Go change your outfit, I can't stand the things you wear." "It's not that I think the way you dress is bad, I just think you wear certain things to show off how skinny you are."  "I don't like your hair color." "You want to get attention." "Your hair is way too long" "You are so quite, that its weird. It's your fault you don't have many friends. You can't just make other people be your friends." "You are choosing to have an eating disorder. Why are you doing this to us?" "All you are is an eating disorder, that is all you care about." "Just the fact that you are Anorexic means you are being selfish" "You have been anorexic for 8 years. Aren't you tired of it? Why can't you just stop.?" "You are wearing us out with your stupid eating disorder." "Just eat and shut up about it." "You are making the choice to have anorexia, why can't you make the choice to just wake up one day and stop it?" "I feel sorry for you."

So according to this, I am

A good writer, but also weird for being a writer. Talented, but not enough to matter. Weird. Smart, but stupid. Mature, yet childlike. Skinny, too skinny. So skinny, I look bad. In order to look good, I would need to gain more weight. My hair is loved and hated. My hair is pretty, my hair is too long. My outfits are trendy. My outfits are hated. I have good style. I dress a certain way to show off how thin I am. I have unique style. I have a style others dislike. My hair color is loved. My hair color is hated. The reason I don't have many friends is understood. The reason I don't have many friends is my fault. I am quite. I am too quite. I am stuck up.  People feel bad I have an eating disorder, and want to help. But apparently, I also have an eating disorder in order to make other people's lives miserable, and that I am selfish.  Anorexia is serious, according to some people. According to some people, Anorexia is a joke and a choice I am making. It can't easily fixed, but it can be easily fixed....

Well at least I am a well rounded person
4 0