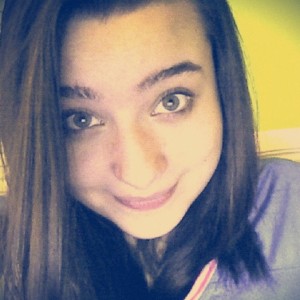 Credit to RandomRequests for the graphics.If you have any questions feel free to ask! Oh and also if you want to follow me I follow back!

Some things you should know about me:
I love hockey! I'm 14 turning 15 in the summer. My favorite colors are green and purple. I'm 5'2. I played soccer and took karate and gymnastics when I was younger. My brother is autistic and I love him to death. I'm mostly shy and friendly. So if you need to talk to be i'll always be here.

We all slowly turned around, revealing our faces to the cops.
I wasn’t really all that scared, until I realized we had guns pointed at us.
“We didn’t do anything wrong!” Jaycie said through tears.
The officer told us we could put our hands down from above our head, and began to question us.
“So, you folks didn’t just come out of that house?” The officer asked, observing us all closely.
“Of course not!”  Zoe exclaimed quickly.  “We’re just walking back from that park over there.”
The officer looked, seeing the Glendale middle school park.
“We decided it would be best to go home after we heard the police sirens.”  Ryan contributed to the lie.
“Oh.” The officer said surprised, while jotting a few things down on his open notebook.
I felt myself begin to shake.
Not only because it was getting cold out, but because no matter how hard I tried, I couldn’t lie.
“Are you okay ma’am?”  The officer question me, with a suspicious look on his face.
“Y-yea-“
“She’s just a little cold sir.” Jake explained, wrapping his arms around me to keep me warm.
His touch sent more chills up my already frozen spine.
“Okay, well, you kids be safe tonight.  You’re free to go.”
I had to stop myself from letting out a heavy sigh of relief.
We all turned, staying quiet for at least ¼ of a mile on the walk home.
“That was way too close guys.” Noah broke the rigid silence.
“Are you kidding me?!” Jaycie shrieked.  “That was f//king awesome!”
We all glared at her, annoyed with her lack of attitude to be serious.
“Okay, sorry fun killers.” She rolled her eyes.
“What’s up for tomorrow?” I asked, trying to change the subject.
“How does the beach sound to everyone?” Jaycie suggested.
We all gave approving nods.
“I’ll text you all the time.” Jaycie said, realizing her house was only a short distance in front of us.
Soon, it was only Jake and I left.
“That was pretty freaky.” Jake said, trying to start a conversation.
“yeah.” I laughed a little, noticing my house was straight ahead.
He walked me up to my doorstep, knowing how scared the situation had made me.
“Bye Bree.” Jake smiled slightly as I walked through the door.
I gave him a warm smile, softly whispering back.
“Goodbye Jake."
Kind of a boringish chapter:p  I've lost a few readers:(  Oh well, i'd rather have that than have to notify 400 people..Again, if you were on the notification list and would now like text message notifications, just text your username to this number(: --->603-522-7302 --(:
I now have the link to my formspring up on my profile! Ask me questions guys:D

TheMascaraSeries
story
PLEASE READ
Okay, so has anyone seen these "fave and I'll rate you" quotes? Not cool
Everyone is beautiful. Everyone is a 10.
So unless you're giving everyone a 10, stop.
People go on this site to get away from the bullying and hate.
So don't insult them here.
If you give them anything less than a 10 some people may not care.
But some will pick at their flaws, wondering what's wrong with them.
Maybe they'll take their picture down, not trust witty.
We are a family. Do we "rate" our friends and family? No.
It's time to start acting like one.

No, snap out of it Bree, you’re not Jealous of that.
It was just a little kiss, it meant nothing.
I brushed off what had happened, and we decided to call it quits on the game.
“Okay, now we actually have to do something worth remembering.” Ryan stated.
“How about we go look around that abandoned house up the street?” Zoe suggested.
“That’s just dumb, why would we do that.” Jaycie snapped.
“Unless of course, you’re scared.”   Zoe folded her arms, with a smirk on her face.
“I-I’m not scared.” Jaycie stammered.
There was a long pause between the two after that.
“Then let’s go.”  Zoe gave a devious smile, leading us out of the house and down towards the abandoned house on the corner.
“So, who wants to go first..” Ryan asked, as we all peered up at the mysterious looking house.
“I think Zoe should, this was her idea anyways.” Jaycie said, holding onto Noah tightly.
Even though I knew she’d never admit it, she was absolutely terrified right now.
“Fine.” Zoe said sternly, beginning to walk up the front porch.
It creaked as we walked on the loose floor boards.
“Zoe, why is there police tape here?  Are you sure we should be doing this?” Noah asked cautiously.
“Yeah it’s safe.” She said a little unsurely.
We continued walking, until we were all in the old house.
“I hear a lady died in here, and no one wanted to live in it after that, so the city just left it.” Jake said, knowing it would scare the living crap out of Jaycie.
“Shut up dude, that’s a load of bullsh//t.” Noah said, trying to calm down Jaycie, who was on the verge of running out.
I giggled a little at Jake, who was walking close to my side.
“Wait guys, what’s that?” Zoe stopped us.
“ Zoe, stop trying to scare me.  This isn’t funny.” Jaycie told her.
“No, seriously, listen.”
We all stood still for a minute, trying to pick up the sound that Zoe was supposedly hearing.
“Oh no, those are police sirens.” I began to panic.
“What are we going to do guys?!” Jaycie began to cry.
“Hide!” Zoe shrieked, shoving herself into the corner of a closet.
We all scattered throughout the house, trying to find an ideal hiding spot.
It was like hide and go seek, but now, it was much, much scarier.
I followed Jake into a large silver bin, just big enough for the two of us.
I had only been home for a few hours, I couldn’t get in trouble already.
I had so many things I wanted to do yet this Summer.
Going to jail wasn't one of them.
I'm so sorry it took this long for this chapter, but I have come to the desision I am done doing witty notifications.  I will have chapters up much quicker without them.  However, ONLY IF YOU ARE ON THE NOTIFICATION LIST ALREADY, you may text this #-- 603-522-7302 to switch over to mobile notifications.  I'm sorry if this is an inconvenience to many of you, but notifications are starting to overpower my life.  I don't have time for them  Sorry guys.  Great job with the faves (:
Hint for what's coming in next chapter---
Suddenly I felt a hand brushing against my cheek.
"I really missed you Bree." He started.  "And I really am sorr-"
---Bree's POV.
Suucky hint, I know, but they will get better(:
The number to reach for next chapter is 700 [:

Pretending to look for your homework when you didn't even do it.

BravoSierra
funny
(c) 2012 erin at Mortem. Feel free to use this format, however you must leave all credit on and leave all credit as is. You can not REDISTRIBUTE IT either. You in no way can change the form of credit unless you are making it MORE VISIBLE.

Since when did
gay became a synonym for stupid?

lanielovesunicorns
vent
This quote does not exist.
59 60