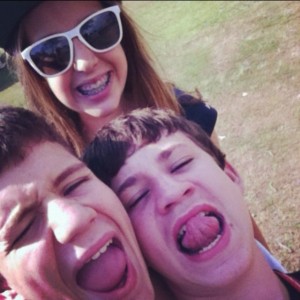 
follow block report
Hey,
The name's Emily, I blow out the candles on the 30th of October, I'm 14 and I live in Australia. My bestfriend also has witty so please give her a follow @SkinnyMiniWannabe.
Cheers babe. xx :)

You really like him/her, don`t you? No names were mentioned yet someone still came to mind... <3
8 0

bubblebubblegum1998
love
My Crush: say your crushes name 6 times now close your eyes and make a wish about them decide whats more important love, or 10 million dollars now make another wish about love or the money repost this in 60 seconds with the subject "my crush" and you'll get an unexpected talk from your crush
1 0

bubblebubblegum1998
love
Ahaha gotta love Steve! He brought back vent but linked to a place where you can buy a diary aha <3 xx ;) love you children of earth <3 xxxxxx :D
2 0

bubblebubblegum1998
funny
Once there was a little girl called Clarissa, she was ten-years-old and she lived in a mental hospital, because she killed her mom  and her dad. She got so bad she went to kill all the staff in the hospital so the government decided that best idea was to get rid of her so they set up a special room to kill her, as humane as possible but it
went wrong the machine they were using went wrong. And she sat there in agony for hours until she died. Now every week on the day of her death she returns to the person that reads this letter,  and unless you repost this she will creep in you room at 12:00a.m. and kill you slowly, by cutting you and watching you bleed to death.

me: *doing something other than work*
teacher: what are you doing?
me: i dont get it sir!
teacher: well you should put your hand up!
me: OK! *puts hand up*
teacher: hello there..
me: hi sir, how are you today?
teacher: good thanks, now whats your problem?
........
haaha ^ true story! :D

unpacking mum`s boxes in the garage into a cabniet
me: *finds a piece of paper with a stick glued to it* what the heck mum?!
mum: oh.. your brother made that when he was in prep
me: and you kept that why?!
mum: because so shutup and keep putting stuff in the box please..
5 mins later
me: *finds something i made in prep* ohh.. thats so cool! i was so creative!
mum: see, when you make its cool but when he...
me: mum.. he glued a stick to a piece of paper in no way is that creative! -.-

in maths lesson teacher: *trying to find work on my laptop, sees 1D cursor* tell me thats not one direction or something! me: heehe.. teacher: it is isnt it? me: yeeah.. teacher: haha thats so cute! *best maths teacher ever, just sayin*
^true story^