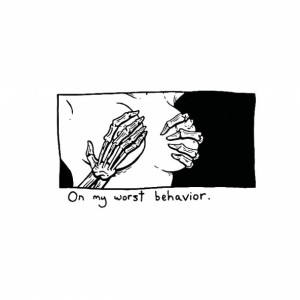 Why is the term “friend zone” so popular when the term “unrequited love” already exists and is more accurate?
I suspect it’s because it shifts the locus of responsibility. “Unrequited love” focuses on the person who has the crush. The feelings being discussed are the crushing person’s, thus the responsibility in on them to get over their crush and move on. “Friend zone”, on the other hand, focuses on the crush object’s choices. The phrase erases the agency of the crushing person. All blame for their pain is put on the crush object. “Unrequited love” is something that can happen to both sexes, but “friend zone” is a sexist concept that implies that women are solely responsible for men’s happiness, and not men themselves.
12 1

destabilise
makeurowndamnlayouts
Format by destabilise.
White people get so angry at the phrase, “You cannot be rac.ist towards white people.”

I will never understand why.

Why are you so angry that you are being treated as actual human beings? You are not reduced to caricatures, but portrayed as characters. You are treated fairly, judged not by your skin tone, but by the ways that you carry yourselves, by your actions.

Why do you want to experience rac.ism so badly? It is not fun to be mocked, dehumanized, attacked, killed, incarcerated simply for daring to exist. It is not fun to know nothing of your history or family because it was torn apart, whether through distance or death. It is not fun to hear, at every turn, comments reminding you of your lesser status as humans.

Do you really want to turn on the tv, open a magazine, watch a movie, play a video game, and not see yourself? Or, even better, to only see yourself as a criminal, as a drunk, a mocking stereotype, or as someone to be killed off? Or would you rather see fleshed out, well-written characters with lives and personalities and feelings? I know which I’d rather pick.

If I were a white person, the phrase, “You cannot be rac.ist towards white people,” would be the best thing I could ever hear.
18 27

destabilise
quote
Format by destabilise.
Yes, I was infatuated with you: I am still. No one has ever heightened such a keen capacity of physical sensation in me. I cut you out because I couldn’t stand being a passing fancy. Before I give my body, I must give my thoughts, my mind, my dreams. And you weren’t having any of those.
——  Sylvia Plath, The Unabridged Journals of Sylvia Plath
32 0

destabilise
inspirational
Format by destabilise.
“i am mine.
before i am ever anyone else’s.
15 1

destabilise
inspirational
Format by destabilise.
“We teach girls shame; close your legs, cover yourself, we make them feel as though by being born female they’re already guilty of something."
48 5

You’ve heard of this girl before, her name is Summer or Alaska or something else that sounds cutesy and different because she’s always trying to define herself as not being like ‘other girls’. The girl who reads doesn’t shop, watch sports, play video games or anything else that she deems to be beneath her. She buys books instead of clothes because who needs to be dressed, she is obviously lying if she says she understands Ulysses and doesn’t find a strange man sitting down beside her in a coffeeshop and buying her a drink even though she doesn’t want one to be predatory behavior. It’s okay to lie to or fail her because she confuses real life with fiction, wanting conflict right before the climax and then a sugar-coated happy ending.

She isn’t a girl at all. She’s an idealized portrait of the already idealized trope of the manic pixie dream girl who only exists to serve as a love interest and teach broodingly soulful young men to embrace life’s many mysteries. Women do not exist to complete you or give your life meaning. It is not our job to get you to see the world with ‘renewed eyes’ and we certainly do not live just for you to project your half-baked obsessive fantasies on us and then call us foul names when we don’t fulfill them because excuse us if they’re your visions and not ours.

And the Girl who Reads is one of the more toxic incarnations of the MPDG because it tells girls that if we like clothes, boys, being around our friends, taking pride in our appearances or anything else that doesn’t seem ‘deep or intellectual’ that we’re catty and jealous. We’re constantly trying to tell ourselves that we’re not like the other girls as if there’s something wrong with them. We all want to seem special and different and quirky so that we’ll eventually find someone whose personality quirks align with ours and create a lasting love affair. The girls who are not like us are called horrible names and treated like they’re worthless as if what they choose to do with their life is our decision. And as girls we cannot help tearing each other down; we see another girl on the street and think ‘oh she’s prettier, skinnier, smarter, more popular, more athletic’.

With the Girl who Reads we measure a person’s worth based on how many John Green books are on their shelves or if they enjoy Bukowski. You do not have to be widely read or able to wax poetic about your favourite author for hours on end to be intelligent or interesting. But it is not the Girl who Reads who looks down on the girls who don’t and labels them as stupid, catty, vain, promiscuous or boring, it is the people who created the idea of her, they believe that because she is so deep and mysterious that her special snowflake syndrome will prevent judgments from being passed at her. Everybody wants to be different, everybody wants to be special but let me tell you something. You are exactly like those other girls; you all are made of the same atoms that make up the solar system but do not think that because you have nebulae in your bones that you are better than anyone else.

I am sick and tired of people romanticizing this belief that if you don’t read that you’re not worth being loved. There are countless people I know who don’t like reading and who are still worth being loved the same amount as the people who do. Tumblr users say that they want to live like the Girl who Reads and be suffocated by the amount of literature they own because clearly book hoarding is the best way to go. Great for you if you want to find someone who likes the same things as you to be in a relationship with, you should want that. But if being a hollowed out shell of a manic pixie dream girl is your ideal life then you need to think more about what it means. I refuse to be a blank canvas on which you draw out all your delusions of what life and love should feel like according to you. I do not exist to counterbalance you.

Stop looking for the Girl who Reads because you won’t find her. There are girls who read but they are not singularly formed archetypes constructed for your approval. Stop looking for someone who fits your 27 point idealized criteria of a person and find someone who’s real. Nobody ends a date by saying ‘wow I think you’re great and all but you’ve never read A Farewell to Arms so it’s not going to work out between us’. That’s just ridiculous. Date someone who makes you laugh so hard that you snort soda out of your nose and even when your shirt is soaked with carbonated bubbles they will still find you and your laugh cute when nobody else does. Date someone who understands when you’re upset with them that you are not just waiting for the plot to advance because the hero always fails at one point or another. Do not fail her, do not lie to her, because she won’t think ‘oh boy this is some conflict before the resolution’ she’ll just think you’re a jerk. Which you are. Date someone who you can love as a human and not as a fairytale. A Girl who Reads may be able to give you a world full of adventure and imagination but you know who could do that even better? A person who actually loves you.

destabilise
inspirational
Format by destabilise.
You were like the summer.
Barely anyone appreciated you
when you were here, but the second
you were gone, all they did was miss
you.
31 0