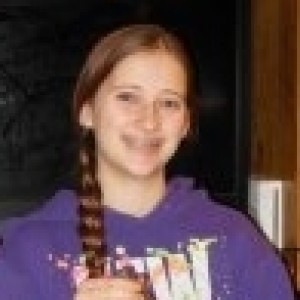 My name is Kristen and I am a chocoholic :) haha
I'm Drama Club president and head of my school's tutoring program. I'm also in Beta Club and NHS.
I'm forever an optimist and my family is the best thing that's ever happened to me <3

Nice to meet you!

I've never been the jealous type before.
But my boyfriend is a camp counselor
and apparently a girl sent him a care package the week after she was at camp.
He wouldn't tell me what was in the note, he said he forgot.
Now, I've never been in a fight before,
But I swear, I wanna b*tch slap this girl so bad right now!
1 1

kristenleigh101
venting
Ignorance
is truly the greatest evil in the world.
I wish people would stick around long enough to realize how wrong the stereotypes are.

kristenleigh101
love
Ok, confession time!
The first time I met the guy I like right now, my excuse to talk to him was that he looked familiar and I didn't know why.
Truth is that i had noticed him looking at me and i liked his smile :)
2 0

kristenleigh101
love
I'm most thankful for being alive.
My mom had two miscarriages before me. It was a miracle i survived her first trimester.Then a few weeks before my due date, something went wrong with the placenta and i literally stopped growing. The doctors had to induce labor and i was brought into the world at only 4 lbs 10 oz (the average healthy weight is 7 lbs 6 oz). I was immediately put in an incubator and was again, lucky to survive. I was a very sick child and I spent my birthday in the hospital taking breathing treatments every year until i was about four years old.
I will never take my life for granted and you shouldn't either.
Happy Thanksgiving.
6 0

kristenleigh101
holiday
This morning i experienced something that i've never felt before.
Complete and total rage.
Sure i've been mad before but nothing ever like this.
Before first period every day, our school has morning announcements and today they played the National Anthem for Veteran's Day.
These idiots sitting behind me were messing around and laughing during the entire song.
As soon as it ended and everybody sat down, i turned around and said,
"Have some respect."
I could barely control my voice. I was shaking from head to toe.
My best friend, Briana, told me to go tell their teacher
She assured me that she would take care of it.
I'd never felt anger like that.
Our veterans deserve so much more than just one day of appreciation
and those two teenage boys couldn't even stand quietly for two minutes to show respect torwards the men and women who fought for their freedom.
That makes me sick.
3 0

kristenleigh101
inspirational
There are so many things in my school that can be compared to Hogwarts.

Our principal is like Professor Umbridge.
Our English teachers are like the defense against the dark arts teachers (I've had four in three years!)
There's a rule in our handbook that says "Inciting or participating in unauthorized student assembly" is punishable by immediate suspension- the Ministry is interfering!

All we need is our own Room of Requirement!
1 0

The Sky is crying.
She and the Sun broke up again.
I hate when they're not together
because I love sunny skies.
They should get back together soon.
They make a good couple.
my quote <3

kristenleigh101
funny
I was trying to tell my friend, Shelbi, the story of Jack and the Beanstalk.
It got a little out of hand...

"Jack went to trade the family cow for money to buy food but on the way to the market, he ran into... I don't know, Rumpelstiltskin, I guess. And he traded the cow for magic beans. So Jack went home and showed the magic beans to his mom and she was like, "You stupid idiot! I'm hungry!!" and she threw the beans out the window. The next morning, there was a giant beanstalk and Jack was all, "Ooh! Imma climb that!" So he went up and there was a golden goose--well, the goose wasn't golden. It laid golden eggs--and oh, yea! There was a harp too!"
"Kristen, can we add a camel to the story?"
"Sure, why not... So the golden goose didn't want to leave the giant's castle because it's best friend, the camel, was there. But Jack didn't want the camel because it didn't lay golden eggs... Or any eggs for that matter. So Jack continued to steal the harp and the golden goose and the giant was like "Fee, fi, fo, fum!" and the camel was like "Nooooo, best friend!" and Jack slid down the beanstalk and became very rich."