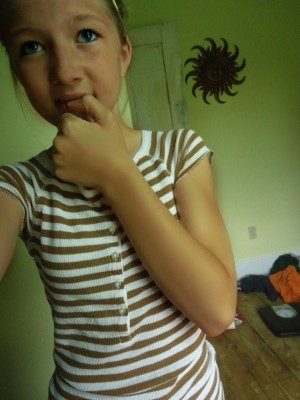 
It's been like a month since I've been on Witty. I get on and how many notifications do I have? none. ;p

So,
i know a lot of people are sick of seeing the
One Direction quotes on every page of witty,
so they're leaving, as am i.
im just going to wait till this all dies down.
i understand that the band is at a really good place right now,
but i dont want to see it on every page.
all i see is "one direction this, one direction this, blah blah blah."
i miss when the witty quotes were original and meaningful,
when the quotes weren't about just one topic.
im sorry, but im going to be blunt and honest,
some of the people on this website have been getting a little annoying.
the quotes just weren't original anymore, it's actually kinda sad..
but, yeah.
i dont know if anyone on here will miss having me on here,
but ill be back on soon.
kbye...

"Lean down a minute first," he says. "I need to tell you something." I lean over and put my good ear to his lips, which tickle as he whispers "Remember, we're madly in love, so it's okay to kiss me anytime you feel like it." ♥Page,249.

They told me never fall in love, It never works out in your favor, You way too young, And right now, that's just human nature.

I feel guilty.
The last time I saw him he had fallen asleep and I wanted to go get some new clothes at the mall.
I told myself I would be back in a couple of hours when he woke up.
When we were finished at the mall my parents told me we would come back next weekend to see him.
We drove 2 hours back down to our house.
That night my dad and stepmom got the call to come to the hospital because he wasnt going to make it through the night.
I was at my moms so I didnt get the call.
The next morning my dad called me and told me that he passed away in the night.
I blew off the person that meant the most to me to go shopping.
I never knew the last time I saw him would be the last.

Hey guys.
I know this is going to be long
So,
It's been 2 months, 1 week and 4 days since my grandfather died.
He was my rock.
He wrote in his will that when he dies, my father and I get all of his belongings.
His house, land, business, everything.
So, my dad told me that it would, finacially, be better for our family to sell our house and move into my grandfather's beat up house.
This house is literally hanging on by a thread, it's ready to go any minute and my father told me he's going to make me live in it?
Eventually we got our stuff all packed up, sold our house and moved into this beat up old shack.
Yesterday we got to the house and started a bonfire in the backyard to just chill and stuff.
We went inside and started to clean out the house so we could put our stuff in it.
I started going through my grandfathers clothes, expecting to put them into boxes and put them into the garage,
but,
my dad came in and told me to just go out back and throw them in the fire.
I was so surprised.
I asked him why and he started to yell about the fact that we arent hoarders and we dont keep worthless sh*t around our house.
This was his father's house, his clothes.
They had this sort of smell to them. When you walked into his house, all you can smell is him.
Most people, wouldn't like the smell, but I love it.
His clothes smell of beer, cigars, and just his own body smell.
Anyway,
My father piled up the clothes, shoved them into my hands and told me to go throw them into the fire.
I took the clothes ouside, toward the fire.
Just when I was going to thrwo them in the fire, a gust of wind came by.
The wind pushed the smell of him into my face.
It was then that I realized I was crying,
I wiped the tears from my face and ran into the shed.
I hid his clothes in a giant empty box and went back inside.
When I came in, I saw my father ripping up the tiles on the floor and some of his friends carrying my grandfathers couch outside to burn.
I was about to stop them when they ran past me and threw the couch in the fire.
I watched as the couch burned.
Okay, yeah,
I know it's just a couch,
but that was my grandfathers couch.
That was the couch that I sat on with him and held his hand while he told me how sorry he was for leaving me.
I sat on that couch with him for hours telling him he was going to be alright,
I stayed overnight for a year when he was sick and layed with him on that couch and just held him.
Nobody knew how much he meant to me, or that I was over there for a year taking care of him
and I don't think they care.
But,
I knew that he cared.
I had so many memories on that couch and I stood there in the doorway and watched it burn
and my father didn't even care.
He acted like everything was alright.
Later, he told me to take my grandfathers bed out to the fire to burn too.
I couldn't believe it.
He was burning basically everything my grandfather ever touched.
Didn't he care at all?!
That night, I was laying in my bed.
I couldn't sleep.
I went out to the living room to watch tv and I found my father crying on our couch.
My father, doesnt cry, ever, but I found him that night, letting it all out.
He sat there and told me how much he regretted burning all of that stuff today.
I sat there and talked with him.
When he calmed down a little but I told him I was going in my rroma dn he should probably go in his and get some sleep.
But he didn't.
He ran out the back door and to the burn pile.
He got down on the ground, sobbing and dug threw the ashes.
I told him to stop, because it was no use, but he wouldn't, so I just stayed there with him and waited till he was done.
A couple minutes later he stopped and pulled out something, furry and black.
A teddy bear.
It was the teddy bear that his father gave to him when he was a little boy.
It was amazingly the only thing that didnt burn.
Just black from the ashes.
He took it inside and threw it in the washing machine and went to bed.
I stayed up that night thinking about my grandfather and that little teddy bear.
I love you Grandpa.
It's hard now, but everthing will get better soon.
Rest in Paradise, Leonard Edward Maker.
January 13, 1953 - January 19, 2012

I lift my chin and stand as straight as I can. The cylinder begins to rise. For maybe 15 seconds, I'm in the darkness and then I can feel the metal plate pushing me out of the cylinder, into the open air. For a moment, my eyes are dazzled by the bright sunlight and I;m somehow conscious only of a strong wind with the hopeful smell of pine trees. Then I hear the legendary announcer, Claudius Templesmith, as his voice booms all around me. "Ladies and gentlemen, let the Seventy-fourth Hunger Games begin!"

"Handsome lad like you. There must be some special girl. Come on, what's her name?" says Caesar. Peeta sighs. "Well, there is this one girl. I've had a crush on her every since I can remember. But I'm pretty sure she didn't know I was alive until the reaping." Sounds of sympathy from the crowd. Unrequited love they can relate to. "She have another fellow?" asks Caesar. "I don't know, but a lot of boys like her," says Peeta. "So, here's what you do. You win, you go home. She can't turn you down then, eh?" says Caesar encouragingly. "I don't think it's going to work out. Winning...won't help in my case," says Peeta. "Why ever not?" says Caesar, mystified. Peeta blushes bright red and stammers out "Because...because...she came here with me.