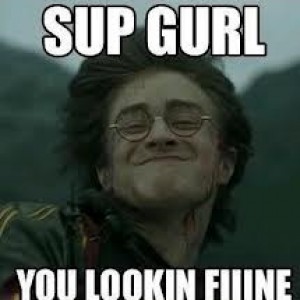 
follow block report
I LITERALLY HAVE NO IDEA WHAT MUGGLERY THIS IS. I MEAN, WTF. THIS IS CONFUSING ME. I UNDERSTAND THE WHOLE QUOTES THING BUT WHAT IS THIS EDIT YOUR PROFILE THING. WHAT DOES IT DO. DOES IT REQUIRE A SPELL. I KNOW SPELLS. I KNOW LOTS OF SPELLS. ..i'm not even joking i'm confused as poop on a tree. I'M STUPID OKAY DON'T JUDGE ME OR I'LL GO ALL VOLDEMORT ON YOU. If you hadn't guessed because your stupid and have no interaction of the world, or books, and think swag will get you through life, please, go..urgh, I don't even know. Just don't be here. Go and find some *cough cough* 'PRETTY' girls on facebook or gtfo the internet :) Oh god, I'm just too kind..too kind... WELL NOW I'LL TELL YOU WHAT I AM YEEEES. I'm a food loving, internet obsessed, simaholic(I made that word up..I think..), socially awkward, sarcastic, mean, harrypotterobsessed(I also made that up..yo jealous?) penguin. I'm in the house Hufflepuff and I enjoy sleeping, talking about things and people that annoy me and obsessing over harry potter :) How I got into Hufflepuff I do not know... Seriously how and why. CAN I TELL YA A LITTLE SOMETHING? I write Sirius(HARRY POTTER DUH) so much that I completely forgot how to spell serious for like five minutes. But I worked it out. And I am proud. YES YOU GO AMY. Oh yeah..and my names Amy..that's kinda important.. WHATEVAH MAJOR LOSAHHHHH. Disney is life. I've been to Disney land. IT WAS FUN AND YOU ARE AAAAAAAAAAALLLLLLL JEALOUS. Congratulations if you've read to the end of this. You deserve a cookie, buuuuuut I kindaaaa ate them all. Kinda. IF I SCARED YOU AWAY YOU ARE A COWARD AND DO NOT DESERVE TO BE A WIZARD/WITCH. I WILL FIND YOU AND I WILL GO ALL VOLDEMORT ON YOU. Okay, I'm going to go now...I should find my pills. JOKING, JOKING, I DON'T TAKE NO PILLS. Byeee! PS. I really don't mean to be offensive. It is likely that I'll get into a stupid argument with you about pills or something but I am joking. I don't have anything against anyone, unless they're big fat meanies. Then I give myself permission to go all Voldemort on them. Goodbye. ;)

Hey guys. I know what your thinking 'another sob story ew bye' but honestly, I need help. A lot of it. Advice, whatever.

Two years ago, a guy asked me out. Let's call him Bob. We went out for about eight months, which is actually a really long time for my age. When the year was coming to an end, he broke up with me. No excuses. No reason. Just randomly broke up with me.

After that, we had the most ridiculous arguement on Facebook which personally, I found hilarious. But apparently, he didn't. At all. He took it so seriously.

When I went back to school, Bob started bullying me. And not just bullying. He'd walk past me and just start punching me randomly. I was the happy go lucky person, the hyper person, I was friends with everyone, everyone liked me and I liked everyone back.

Bob got all of his friends to bully me too. They'd call me names, including one extremely idiotic girl, who we'll call Sheila. Her and her two friends(who we'll call Janice and Bobette) were horrible to me. As well as Bob, actually. They started calling me a horse whenever I walked past, and they'd neigh and laugh at me. By this time I was losing friends, and really really quickly.

Bob became really popular. Him and his friends starting getting everyone to hate me. Every now and then I'd beg him to stop on Facebook. He'd say yeah, I'm really sorry. We'd become 'friends'. Then, the next day at school it would carry on.

Sheila, Janice and Bobette were spreading rumours about me. Apparently, I had nits, I picked my nose, I banged almost everyone in the year, and everyone believed it.

Before, I was the happy go lucky person who had no problems, and always had something funny or sarcastic to say. Now, I was the depressed person who was having self-harming and even suicidal thoughts.

It may not sound bad to you, but to me it was absolute h.ell. You do not understand how much this hurt me. Nobody liked me. At all. Everyone bullied me, punched me, kicked me.

One day, I snapped, I had a complete yelling fit at Bob. He apologised, then told me he fancied me. Of course I didn't believe it.

To be completly honest, by this time I was winning my friends back very slowly. Although, Sheila is pretending to be my friend to get secrets out of me to spread. I haven't told her anything, luckily.

But anyway, he told me he fancied me. I didn't believe it at all, as he's said this many many many times before.

But he just asked me out.

Please, somebody help me? This may not sound major to you but it's literally he.ll to me.
0 3

siriusly_amazing_quotes
help
Me with other kids: Aw, aren't you just adorable! Do you want me to plat with you?

Me with my siblings: I swear to god if you touch, speak, hear, smell or think of me I will turn around and I will slap you around the face.
2 0

siriusly_amazing_quotes
kids
Me about everything: I literally don't care.
2 0

siriusly_amazing_quotes
funny
Have you ever wondered?

Ten years from now, you could be married, and have three children.
Or you could be a cat lady.
I like cats...

siriusly_amazing_quotes
funny
Have you ever wondered?


Maybe, you can actually walk into mirrors, but your reflection stops you.
(C)siriusly_amazing_quotes. yes, it thought of it myself. suprising, isn't it?

siriusly_amazing_quotes
copyright
My friend: Muum I'm really ill :(
My friend's mum: Oh, sweetie! Poor you! You must stay home! Would you like some medicine? Do you need to go the doctor? You look pale. Your freezing! Here, have a blanket. Or two. Or three. Or four or five. Have some ice cream. Let me put some TV on for you. You look terrible. I better call the school and tell them your ill right away! Honey, be careful! Don't move, I'll get you some food!