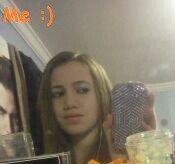 Down to the Second.

“Are you being serious?” My mother looks at Walter, wild eyed. He nods.
“I used to live there, and I paid off the house a while back, so I just decided to keep it as a vacation house. We can move there, where Delilah won’t be hiding from the cops.” He shrugs and looks at the ground. “It was just an idea.” I’m shocked at how dedicated he is to my mother, but I refuse to move to New York with him.
“What about Carter?” I ask my mother.
“He didn’t do anything wrong. Besides, doesn’t he have a family here? I mean, Delilah, that’d be kidnapping.” I look at Carter, and he’s staring at his shoes. “I think maybe Walter is right. I mean, how are we supposed to continue living here when you murdered someone? It’s only a matter of time before the cops come looking for you! Wouldn’t you rather move than be arrested?”
“I don’t think you understand. My life is here. I love Carter, and I don’t want to lose him. I can’t just move away from him!” Imagining myself without Carter literally hurts me. He’s saved me every time I’ve needed saving, and we’ve grown too close to be separated now.
“Honey, I know this will be hard for you, but what other choice do we have? If you stay here, you’ll be put in jail, without a doubt! You won’t be with Carter anyway!” This makes me mad.
“Then we’ll just runaway together…right Carter?” I look at him, and his eyes meet mine curiously.
“Well, I don’t know if I can do that, D…” He stampers over his words, making me furious.
“Can I talk to you upstairs for a minute?” I ask Carter, and he nods. “Excuse us.” I say to my mom, heading up the stairs and going into my room with Carter. “What the he/l is wrong with you? Do you want me to move to New York? We’ll never see each other again! I thought…” I stop, getting emotional. “Forget it.” I say, pulling my suitcase from under my bed. “I’ll leave, and move to New York with my mother and her horrible boyfriend, and you can find someone else to obsess over.” I open my dresser and start throwing my clothes into the bag angrily, and Carter grabs my hand to stop me.
“Delilah, how many times have I proved to you that I love you? From that night at that stupid Ball, I haven’t stopped thinking about you. I took care of you when you got lost at that party, drunk off your a/s, and I saved you when you were nearly killed at Sherman’s. I was arrested because of you, and yet, I still love you, and you know what Delilah? We’re not even officially dating. I can’t even call you my girlfriend, something that I’ve wanted to do since the second I laid eyes on you.” My heart feels heavy suddenly, and I stare into his eyes. “I don’t want you to move to New York, D, but I also don’t want to see you rot in jail. So I don’t know what to do.” He must be able to tell how upset I am, because he wraps his arms around me gently, cloaking me in his wonderful smell and warmth. I start to cry, trying not to, but not able to hold it in. He grabs my face gently and lifts it so that I’m looking right at him. “I love you, Delilah Shawn.”
“Carter…” I whimper. Those words scare me more than anything. Every time I’ve heard it from a man, they’ve turned their backs on me. That’s why I don’t commit to just one guy.
“What? Don’t you love me? I mean, you just told your mother that you do…”
“It’s not that Carter…I’m just scared.”
“You don’t have to be…it’s me. I’d never hurt you.” I kiss him suddenly, hoping that I can show him that I love him without actually saying it, because it’s the words that frighten me so much, not the actions. He pulls me over to my bed and we lie down, still kissing softly. I move on top of him, kissing him harder, happy that I locked my bedroom door. His arms wrap around my lower back, close to my butt. He seems hesitant, like every other time we’ve really kissed, so I stop kissing him for a moment and just look at him. I give him a look to tell him that this is okay, and he starts taking initiative, rolling on top of me and kissing down my neck and whispering sweet nothings in my ear. My nails scratch down his back, and I yank off his shirt quickly, kissing down his chest. I feel the hair on the back of his neck raise, so I continue until he finally loses control and pins me down, kissing me toughly while wriggling off my shirt. He manages to quickly get my shirt and bra off, while I get his pants off, leaving him in only his underwear. He starts working at my pants after looking at me one last time to make sure I was comfortable with it. I simply nod at him, and he pulls them off with little hardship, which was surprising considering I was wearing skinny jeans. After that, I realize that this wasn’t going to stop, so I reach into my nightstand and grab a condom, and from there, it was the best night of my life.

when i'm in the car
and a sad song comes on the radio, i stare out the window and act like i'm in a movie♥

sksx9
advice
I want a person who
comes into my life by accident,
& stays on purpose.

So they played apart.

After a few minutes, they played again and shared toys.

Because for kids,
happiness is more important than pride.
6 0

simmyx
cute
Rember the little things in life
because someday they will make a
BIG part of who you become.
♥♥♥♥♥♥♥♥♥
4 0

SierraBr00ke
inspirational
Waking up in the morning
Person: Good Morning!
.....
Me: Shut up.
7 0