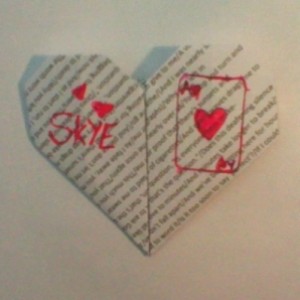 hey, to whoever cares,
im going away for awhile, but ill be back
i need to go off for awhile.

skyewonderland
bye
I'm going to bed, I have to sort out some stuff inside my head. Please don't do this again heart...
1 0

skyewonderland
sad
Heres to the girls, that aren't afraid to LOVE OTHER GIRLS. Or to love her pets more than makeup. To girls that give a damn about others lifes.

Had a bad day,

Tell me it will be fine


I cough, stop the tears

And You Ask if Everythings ok


I look to you and the butterflies take wing

skyewonderland
love
I have a big problem.
I think its big, its weird.
Its strange.
0 0

skyewonderland
strange
My friend- Whatcha doin'
Me- Hangin' around
My Friend- Your stuck upside down again arent you
Me- yeahuh Help please?
My Friend- Nuhuh

skyewonderland
yeah
30 day challenge
1. 15 facts about you
2. Initials of the person you love
3. Your closest friends
4. The thing you most fear
5. The saddest moment in your life
6. Favorite sport
7. Favorite song
8. Your deepest secret
9. First impression of the guy you like now
10. Last time you cried
11. Thing closest to your heart
12. When you hear this song you cry
13. Place you wanna visit badly
14. Favorite book
15. Favorite animal
16. Favorite show
17. Last time someone hurt you
18. The story behind your life
19. Person who scares you the most
20. Last major injury
21. Favorite youtube video
22. Phone type
23. Biggest confession
24. Last break up
25. Last heart break
26. The day you regret the most
27. First friend
28. Favorite drink
29. A letter to someone in your family
30. A letter to a friend
0 0

I wanted to say you are strong, there is another way. The fault lies nowhere.
Life is hard, but you got to find its meaning it holds for you. Hope is a funny thing.
Its that little voice that is saying in the background words of Wisdom.
Or, in my case, singing "Suvivor". You are beautiful, pretty, intellegent and strong.
I love every single one of you, No Matter What. No matter who you love,
What you look like, how you are mentally or physically.
Your Perfect To Me.

skyewonderland
hope
My brother just went to town. I'm seriously thinking what the hell he is gonna do...
1 0

skyewonderland
worried
Quit with the ' Wake Me Up When September Ends' Jokes.
(thanks for the inspiration MyChemicalHorizon)

Wake Me Up When September Ends song meaning

In this song Armstrong reveals his feelings about his father who died in September of 1982 when Armstrong was 10 years old. However this is not the only meaning that this song bears. For most Americans the month of September is associated with the 9/11 terrorist attacks of 2001. A lot of people have lost their loved ones to that tragedy and September (which comes on the album as track 11) is connected not only to the death of the author's father, but also to the families of the victims of 9/11, and the pain of losing loved ones in general. This is a song of wisdom and acceptance. "Drenched in my pain again, becoming who we are" - the realization of the fact that everything we go through, all the pain and losses, all the hardships we meet along the way are meant to make us stronger and shape our personalities.
In the video for this song we see a young couple that gets separated by the circumstances. This shows the director's view of the song: we should treasure our loved ones and never take them for granted, because they can be taken away from us any moment.
Wake Me Up When September Ends is believed to be the most detached song of the album because it mostly portrays the author's personal feelings and is barely linked to the story of the album. However, the song could be perceived as a part of the plot if we assume that the words of the song come from Jesus of Suburbia and this is him looking back on his childhood, his family and maybe his own father's death. He's recalling the better times he had in his past and realizing that his life in the City is really bringing him down. This gradually leads him to his decision to go back home.
Also the song portrays Jesus' loss of innocence. He entered the City with excitement, but after everything that's happened to him, he sees that the freedom that he longed for is now hurting him. It all seemed so new to him at first, he thought he was discovering the world, his perception was enthusiastic and bright ("Hear the sound of the falling rain - coming down like an Armageddon flame"), and now everything lost its color ("Here comes the rain again, falling from the stars - drenched in my pain again..."). Complete loss of innocence - Jesus is growing up, Jimmy is dying.
12 4