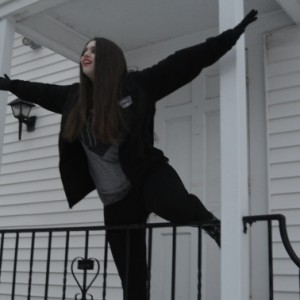 
Loving life. =) <3
I love to write <3
I LOVE JESUS!
All my quotes are original unless otherwise said so please don't copy them unless its one that is meant to be copied! Thanks!
My best wittians are mrshunterhayes, ThisIsMe943, RubiLouise, XxBlackVeilBethxX, and doublesidedice.
You guys are all awesome!
I love grilled cheese sandwiches! They are the best!! I love being weird! Yayness!

Hey Rachael. I see you hacked my witty. I will get my revenge. Trust me I will. This hasn't ended yet...


I tried to forgive you but as much as I hate to say this I still sort of blame you for all this.

wordynerdy
love
I’m not really sure how I ended up with her sprawled next to me, drunk, driving down the road at midnight in my old, beat up, Toyota. Don’t get me wrong, I remember everything, I’m not one to drink. But of all people that could’ve been grossly drunk in my car, Faith Starling was one of the last people I would have expected. I mean sure, she was usually at these parties that I went too but she’d never been like this. She had always been more of a mystery to me, a gothic, amazingly beautiful girl that seemed always to be walking in the shadows with her head held high. Loved by some and hated by others with little room for the in-between. It wasn’t until this very moment that I realized I never really saw Faith as a person. She had always been a figment of my imagination until now.
“Miles, you’re driving too fast…” she slurred, giggling. “You should be a race-car driver… Vroom vroom.”
“I’ll have to look into it. Now try to get some rest honey,” I replied, glancing at her slightly.
“Okay Mr. race car driver. Nighty night!” Her body went limp as her breathing steadied and within an instant she was out.” I sighed and let a small laugh escape my lips, trying not to dwell on the night’s events. For her sake I hoped that she didn’t remember the night when she woke up. Hell, I almost wished I was drunk at the moment. I could only imagine what it would feel like for her to wake up and be forced to remember. Thinking of what could’ve happened if I hadn’t stumbled into the dark bedroom while trying to find some quiet space; if I hadn’t found her with Bobby Jackson’s hands holding her down and attempting to undo the button her pants. I hoped that she wouldn’t remember the way that I pushed him off of her and the way she bit him, causing him to slap her and push her defenseless body to the ground. This wasn’t the type of thing I wanted to be the hero for because this wasn’t the type of thing that should be happening in the first place.
I wished I knew where she lived. That way I could bring her home and maybe give her more of an opportunity to banish the memories from existence. But instead I was forced to pull into my driveway at 11:27 p.m. and carry her fragile body up the creaky wooden stairs into my bedroom. I was grateful that my mom had cleaned my room earlier in the day as I placed her body under the covers. For a moment I debated where I should sleep. I had originally intended on sleeping on the couch downstairs but then I realized that it would probably best if I was there to tell her where she was when she woke up in the morning. So I groggily dragged my beanbag from the corner and curled up under a throw blanket on the floor.

After a while it became apparent that sleep wasn’t going to be coming along for a while. So I went downstairs, made myself some hot chocolate, and drew my sketchpad out from under my bed. As the lines started to be etched onto the paper I wasn’t exactly sure what I was drawing. My strategy was more just to let my hand do the work while my brain is cleansed of all perpetrating thoughts. Two hours later I had a black and white sketch of Faith standing on a table with a beer can raised to the air and heavy eyelids. Sliding the sketchbook back into its permanent hiding place, I slithered to back to my bean bag and allowed my now cleared mind to drift off into the dream world.


THAT WAS THE FIRST HALF OF THE FIRST CHAPTER OF MY NEW NOVEL. COMMENTS PLEASE?
2 0

wordynerdy
story
wrote this a while ago but, what do you think?
*Little Girl  is a reverse poem. Once you finish reading the poem read it again but this time from the last line to the first and watch as the story transforms. Enjoy.

Sitting, surrounded by sweetness
There once was a little girl
She played all day
Her imagination engulfing the world
Only joy surrounding her soul
Once but not anymore
She released a shrieking no
With all left in her
She jumped towards the little light left
The demons asked as she sought escape
Come to play in the dark?
Told her she’d never be good enough
Evil words always coming for her
Voices were all so cruel
With utter resistance
She shrieked
NO
NO
NO
NO
NO
Listen to us they whispered
You will never be good enough for the angels
You will never be loved
You will never be anything
The little girl had, had enough
Her dreams were gray
Monsters lurked in corners
The nights were oh so cold
There was once a little girl so very alone
Surrounded by monsters, eating her soul.

wordynerdy
cool
Poetry is the one thing that keeps me sane, an outpouring of emotions I didn't know I had explained in ways I don't even understand. Poetry is my soul bleeding out, the deepest chambers being opened and allowed to glisten in the light.
7 0

wordynerdy
true
Who needs homework when you have witty?
4 0

wordynerdy
school
"Some people miss the message because they are too busy checking the spelling" -Maynard C. Carney
4 0

wordynerdy
terrible
DO NOT STEAL MY TWIZZLERS UNLESS YOU WISH TO BE MURDERED.
:D have a nice day!
2 0

wordynerdy
true
Literally if you were to let me watch Youtube videos all day and give me a bag of strawberry twizzlers to eat I would be happy.
6 0

wordynerdy
true
HAPPY BIRTHDAY TO ME!
IT'S TIME TO PARRRTTTYYYY.
3 2