"Yesterday Harry cried because he missed his mum and didnt


"Yesterday Harry cried because he missed his mum and didnt want to sleep with me. He wanted to be alone in a room. Then Niall went by him, He joined to isolation because some girls told him he did not deserve to be in the band so he ruined it, so as to make him cry I just wanted to say STOP! Stop harrasing Niall. He's fragile and whenever someone says something bad he starts crying for hours and I dont like it. If he were not in the band, we would not be One Direction. Im very protective of him because he's like a child and he's the most beautiful guy I have ever met in my life and the luckiest girl in the world will be his future girlfriend. To me he's important and I love him so much so, to all the girls that insult him and then come to see Louis, Harry, Liam and me IM NOT GOING TO CALL YOU DIRECTIONERS because a TRUE DIRECTIONER loves each of us. Niall I love you"
-Zayn Malik

i love Niall, hes gorgeous. GO ZAYN! can you post the link to this on my profile?
reply 0

Can you post the link to this on my profile?
reply 0

i love you niall dont listen to them!!

He's amazing! They wouldn't be a band without him!
reply 0

Nial is amazing! He should totally get more solos, I love him so much!!! One Direction wouldn't be complete without him ♥
reply 0

I love Niall. I agree that he doesn't really get that many solos and stuff but he is awesome I love them all & I feel bad for him he is such a cutie and I love him for being in One Direction. I agree One Direction would not be as good as they are without Niall. He's like the one puzzle piece that is most important to One direction <3
Go Niall <3
reply 0

Living in Ireland i think Niall is actually a really decent Irish guy hes reallly cute as well people are just so annoying for gods sake hes in the band for a reason and what a random girl will say wont change anything.
reply 0

when did he say this? and that was gawwwwjusss! (yes i know its spelt wrong XD)
reply 0

Awh Zayn♥ And of course my baby Niall, lol♥
reply 0

zayn is right... if girls insult niall their not true directioners... i love Niall he is the special snowflake and if i hear anyone insult him i literally start blowing my head off at him... he's too fragile to hear all this stuff about him... i love him and i love zayn because he's just tooo sweet and yea... their amazing boys and people who say otherwise should be shot!!!!
reply 0

I think they're all amazing.
reply 0

I love Niall! I'm constantly defending him (and it is easy because there is so much to love about him♥)
reply 0 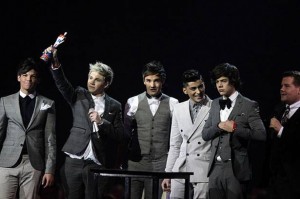