The Monsters InsidePrologue I wasn't born crazy. Oh, no. That

The Monsters Inside
Prologue

I wasn't born crazy. Oh, no. That part was pathological, or so they tell me.
Some people aren't so lucky.   "Only the crazy ones live," at least thats what the Remmers say. "Only the crazy ones can see." I see them everywhere. I've always seen them. From the time I understood I saw things that others could not, I knew I was special. Special, not crazy. But the doctors say I'm crazy.
The Remmers tell me that we were put here for a reason, to fight them. We must fight, because others cannot. This war has been going on since the beginning of time itself. Us against them. There are 21 of us in total; eleven males and ten females, including me. You couldn't call us an army. We range in age from 17 to 24. Nothing but children defending the Earth. But defend we must, because we can see.
Our life is a daily, constant battle, out fighting and risking our lives. We are almost willing to die. Some would think the battle, the blood and the scars are the worst part.
I think they're wrong.
I think most of us would rather be out risking our own life, than to sit at base, waiting. Not knowing if your team, your best friend, or the one you love is alive. Not knowing if they're going to come back breathing. Not knowing if they're coming back at all. That's the worst part.
But, that's the life we live. Our chosen path. So we live for today, because in a world like ours, you never know if you'll be alive tomorrow.

authors note;
ohk, first off. I'm sorry the formatting is messed up, so I can't do indenting ):<
anywho, sorry its short & pretty boring so far. Confusing, maybe. But I promise, it gets better!
Also, this isn't technically a war story, it's a love story. Somewhat.
I love all my supporters. <3

. why is this so short? you neeeeeeed to write more. ohk? thanks babe < 3
reply 0

its great! i loved it
reply 0

No way is it boring PLEASE do the next chapter it sounds awesome so far :)
reply 0

Awesome!! Lmk when the next chap is up!! My crushes name is Rem so when I saw remmers I instantly thought of him<3!!
reply 0

this is sooooo interesting :)
i cant wait to read it
u have major skilllls xD
let me know when the first chapter comes out ;)

you're a really good writer ♥
its going to be a great story!

Its good, unique. Not like other stories on here♥
reply 0

well written! will be waiting for more ;) good job
reply 0 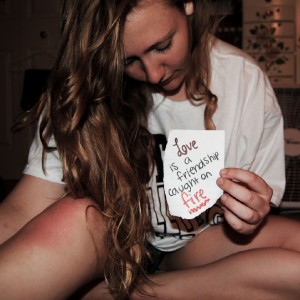