Remember That Night Kristina gasped. She was engulfed in darkness.


Kristina gasped. She was engulfed in darkness. She couldn't see one light at all. Then, she felt like she was being carried. Carried away.

Was she dead? Was this heaven? Is this how easy and calm death felt like?

Kristina blinked. She was being carried. Inside a bag. Kidnapped. She punched all around and kicked, anything to get the killer's grip loosened. She swung back and forth and jolted herself for minutes. Then, she stopped. She took five seconds of just stillness. And then forced herself suddenly with all her stregnth and punched in the air. Her fist landed on something hard. A groan came from the person she had hit.

Kristina was dropped from the killer's grip. She scrambled to get herself unwrapped from the bag she was in. As she just got out, she took a quick glimpse at the killer. Whoever it was, was laying flat on the ground, coughing. Kristina sprinted away back to her house. The killer had managed to drag her up all the way up her street.

She ran to the front door and locked it. She looked out the window. The killer was gone. Out of the corner of her eye she saw yellow car lights whip by onto the corner of another street.

Kristina ran through the house and locked and closed everything she could. Locked the doors, sealed the windows, closed the curtains, and shut the lights. She ran downstairs to where her friends were, still getting over the fact that Jen was gone. Kristina left her friends by themselves for a good fifteen minutes. When Kristina got back downstairs, they were looking all over the basement, trying to find evidence or clues to what happened to Jen.

"But, the thing that kills me, is that, we didn't even hear someone come in. Were they stalking and...listening us the whole time? How long were they hiding? And where were they hiding?" Jillian was saying.

"It's just sooooo creepy. I mean, I was sitting right next to Jen the whole time. I didn't hear one thing/. Not even a footstep or breathing. It was like...the air took Jen. Because wouldln't you think that I would feel or hear something, epcially when I'm sitting right next to her? And how come whoever this kidnapper is didn't take at least two of us? Its like a mind game this person is playing with us. A game. Like hide and go seek, I swear..." Jess said. 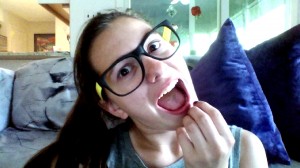