I practically sprinted towards it, grabbing Bailey and hugging her tight. She was covered in blood, but she wasn't crying. If I was in her position I would be screaming my head off. I walked slowly into the house, careful not to drop her. I wasn't good with babies. I took her straight to the bathroom, removing her clothes and starting the water. There was absolutely NO warm water. I turned it off, getting up and I cussed under my breath.  I left her in the bathtub, figuring she would be alright. I made my way slowly into the kitchen, reaching the microwave. I didn't care if it only warmed it up a bit. It was better then putting cold water on her, that could make her sick. I went through the cabnet, finding a semi-big bowl, and turned on the faucet running water into it. I turned off the water and walked towards the microwave, putting it in and pressing it on for a minute, checking it periodically. I wondered why this place had electricity, but no lights. Or atleast not that I knew of. When I thought it was warm enough, I began running around the house trying to find things I could put on her. I found a shirt figuring I could cut it halfway off, and searched around the house for maybe a rubberband, tape, scissors, anything.. The last drawer I opened had just about everything I needed. I found a safety pin, scissors, and tape. I went into the bathroom, finding adhesive pads. I felt so stupid for thinking I could make them into a diaper, but I had to try.  I also found vaseline, and ear swabs. I went into the kitchen, and laid everything on the table. I went to the bathroom, grabbing the warm water, and sitting down by the bathtub. I opened the door on the sink next to me, grabbing a towel and a rag. I put the rag in the water and began to clean her hastily, trying not to waste anytime that could make her cold. I washed her hair, as well careful not to get it in her eyes. I washed her down with soap too. I had nothing else but I had to get this blood off of her. She began to cry and I carefully dumped the rest of the water on her, washing off the soap. I wrapped her in a towel, shuffling to the kitchen table. I put vaseline on her, so she wouldn't get a rash, and I began to take out the adhesive pads, shaping out a diaper around her. I taped it on her, making sure it wasn't too tight or loose to where it would cut off circulation or fall off. I then cut off the shirt halfway, putting it on her and safetypinning the shirt together in the middle. It was the best I could do, to be hasty. I figured I could give her some water when we wokeup, but I was so tired. The worse part is you aren't supposed to sleep with a concussion. I brought her to what I assumed was Luka's bed, and laid her next to me. I wrapped a blanket around her to keep her warm, trying to keep her from falling off the bed as well. Just when I was about to fall asleep, I heard loud footsteps approaching behind me, I tensed up, turning around. This time, Luka wasn't here to save me.
Feedback?(: 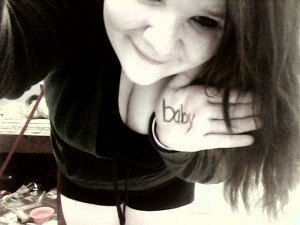