Secrets Behind The Words Chapter 11 Elizabeth's P.O.V. Me


Secrets Behind The Words


Me and Mike were totally making out in the toilets and Chrissy never knew!
When we were allowed in the toilets again, Mike pulled me closer.
"Elizabeth," he whispered. "There's bad news."
Mike explained to me about Kaylie finding out about us, together.
"She might tell Chrissy!" he ended.
"That Kaylie b/tch," I muttered.
"What?" asked Mike confused.
"Nevermind," I said, pulling him in closer for a long smooch.
The toilet door swung open, and we were still kissing.
"Cut it out," I whisper-yelled. "No one can find out about us."
We pulled apart, and standing there was Kaylie.
"I'm out of art class, and I see you guys in the toilets again?!?!" she shrieked.
"It doesn't look like that, Kay," I smirked.
"Well, yeah, you probably just had a long smooch and pulled away. I'm so telling Chrissy now."
Mike's face turned a ghostly white. "No, you shan't!" he cried.
"It's er, sort of private at the moment. Pinky promise you won't tell now or tomorrow or the day after, so on until I let you?"
"Say, it's a deal," I snarled to Kaylie.
"Why should I say that?" she asked with a raised eyebrow. "You're not even part of this little arguement, so shoo."
Mike shot a glare at Kaylie, but she ignored it.
"Well...I'm not keeping the promise. Bye."
And the door swung closed.
Hello, I'm Wawwa, I'm a new writer for this account. Ignore the name 'TwoWittyWriters', make it three. I'll be doing Elizabeth's P.O.V. Hope you like! ~Wawwa 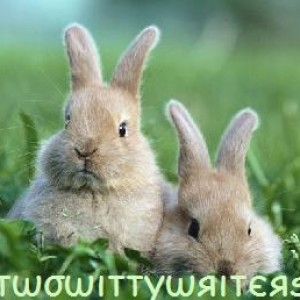