“…The importance of online safety cannot be stressed enough in this day and age; we want…” I tuned out the sweaty man on stage as his voice echoed throughout the crowded auditorium. I pulled my phone out of my uniform pocket and turned the brightness down so none of the teachers would notice; not that they really cared. This was assembly was just as dull and boring as the last. No one paid attention at these things, they were such a waste of time-- I mean, I’m not complaining. I don’t mind getting out of class, but this is almost worse. Every time we have an assembly in here, it gets so hot. I swear the custodian secretly turns the heat up just to make us miserable.

My thoughts were interrupted when I saw the person next to me tense up. I assumed there was a teacher looking around, so I slid my phone in between the seat and my leg before scanning the auditorium to see whom it was. None of the teachers were paying any attention to me though; they were looking at something at the back of the room, probably just some idiot getting into trouble. I was about to take my phone back out when it occurred to me that the man on stage had stopped speaking; it was too early for the assembly to be over already, wasn’t it? I shifted my gaze up to the podium.

The man was still standing there but he looked like a deer in headlights, and now he was sweating more than ever. His eyes were locked on the back of the room. I glanced around the huge space one more time, going more slowly. The people around me seemed to be making the same realization as me. My palms were getting sweaty, what the hell was going on. No one was talking anymore; they could probably feel the tension in the room as much as I could. It was so quiet, you could hear a pin drop.

I wanted to know what was happening, and I could if I were just to turn around. But I didn’t, because I think I was scared of what I might see. It was almost like my brain was telling me that if I didn’t know what it was then it couldn’t be real.

The second I saw what it was I let out a little gasp- of relief. I had broken the silence and that caused a few heads to snap in my direction, but it didn’t matter. I looked at the guy in the doorway and started to smile, it was only Lucas, and he was just a little late for the assembly. I don’t see what the big deal was.

And then I saw it. My face went slack; any sign of a smile gone. My eyes had drifted to Lucas’ arms. They were stiffly pointed out in front of him. In one of his hands, he held a solid, black gun.

story? yes or no?

You should upload it on Wattpad!! I'm sure you'd get a lot of reads (:
reply 0 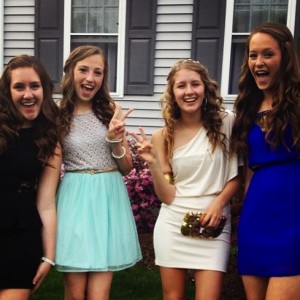