Fate Chapter 1, Part 1 I close my eyes and take a shaky breath.


I close my eyes and take a shaky breath. The air is thick with sweat and the smell of pure desire of crazy, lustful teenage girls. This can only mean one thing. I’m at a One Direction concert.
The wait is unbearable. The screen shows an endless repeat of commercials, teasing every starstruck girl in the arena. I look to the right of me, sharing an excited glance with my best friend, Sophie. Her eyes dart to the empty stage in front of us.
“I can’t believe they will be standing right there,” she whispers, her blue eyes widening in excitement.
“I know! We will be so close to them, we might even be able to touch them,” I say, equally as excited.
“I can’t believe we actually won these tickets,” she says, pulling her dark brown hair into a ponytail.
“Sweating too much already?” I ask with a smirk.
“Kristen, you are way too perverted. It’s like you and Harry are meant to be,” she fires back.
I roll my eyes at her comment. So, I had a thing for Styles. But who doesn’t, with his dark, luscious, curls. Not to mention his tall, toned body, arms and stomach covered in tattoos. He’s practically a s*x god. Correction: he is.
I am halfway through my thought, as the stage lights up. We both scream and jump up and down. This will be a fun night.

It is more than halfway through the concert when the boys finally play my favorite song. Rock Me. The night is just getting so much better. Louis has done plenty of hip thrusts, Liam and Zayn both hit high notes perfectly, Niall is being his usual crazy self, and Harry. He has looked over at me, holding my awestruck gaze, more times than I can count.
During the chorus of the song, I get an idea. I lean over to Sophie, trying to tell her what I plan to do quietly enough so the annoying b*tch next to me doesn’t steal my idea, but loud enough so she can hear. I feel a rush of adrenaline, as she nods her head in approval. Now, for the right time.
He starts to walk towards my side of the stage, making eye contact yet again. This is it, I think to myself. “HEY STYLES,” I scream, trying my best to sound flirty, “CATCH!” I toss my phone into his large hands as I wink at him. He smirks and winks back.
“Do my eyes deceive me, or did Harry freaking Styles just wink at you?!” Sophie yells to me.
I hear an annoyingly pitched cackle next to me as the b*tch smiles sarcastically at me.
“Um, excuse me, but that wink was for me.” She states cockily.
“B*tch, please,” I say under my breath. Not quiet enough.
“Sorry, but I’m positive Harry wasn’t winking at your ugly a**.” She says.
Oh no she didn’t. “Listen up, honey. I’ve been listening to your awful screeching for the past hour and a half, right in my eardrum, and now you’re saying Harry was winking at you, and that he would choose you over me?” I yell in her scrunched up face.
“That’s exactly what I’m saying,” she states, tilting her head, as if waiting for me to slap it.
Well, she asked for it.
WHAM.
My sweaty hand hits the side of her greasy face.
“Oh crap! Kristen! You go! Everyone, that’s my best friend!” Sophie screams, pointing at me.
“Did you just slap me?” the blonde b*tch yells in pain.
“Yeah, and in doing so, I got all of your cheap foundation on my palm. Ew.” I say, as security rushes over.
“I regret nothing,” I smirk as the girls behind me break out in applause.
The burly security guard grabs me and takes me to a tent behind the stage. I hear Sophie chanting in excitement as I leave.

“Alright, miss. We understand the situation, but you cannot go back out there because you hit that girl. Even if she deserved it,” the surprisingly funny guard tells me.
“Are you with your parents?” he asks.
“No, I drove here with a friend. She’s still out there, too.” I reply, wishing I could see Harry some more.
Harry.
Out of all the commotion, I forgot Harry Styles has my phone.
“Alright, young lady, you can wait here until the concert is over.” He says, leaving as I sit on a foldable chair, trying to listen to strands of their voices.

Sophie’s POV:
I can’t believe she put that b*tch in her place! I think to myself, smiling. All of a sudden, I panic, realizing we are still at a One Direction concert, and Harry Styles still has Kristen’s phone. “Oh, crap!” I say aloud.
At this point, the boys were answering twitter questions. But Harry was facing away from the crowd, his attention focused on a small, white object in his hand. Straining my neck to get a better look, I see it. In his large hands. Kristen’s phone!
What is he doing? I wonder.  He looks back over at the empty space next to me. As quickly as I notice this, he slides the phone into his back pocket. What the...?

Kristen’s POV:
Finally, the concert is over. I see Sophie running towards me squealing with a huge smile on her face. “That was amazing!!!” she yells as she pulls me into a hug. She releases me from her death grip and her face goes white at something behind me.
I turn around to see the tall silhouette of Harry Styles. Oh my god, I think as I look up into his deep, sparkling green eyes.


Hey guys! I hope some people are reading this....ahaha we really love this story and hope you guys do too!! I promise I'll try to write the next chapter as soon as possible! Spread the story around, if you like it!!

Does anyone know why my computer won't let me make the title colorful?? Helpp

Special thanks to: 1D_Fanfiction Check out her stories if you haven't!!!

I'm loving this story(: Thanks for the shoutout at the end!
reply 0

Thanks! And you're welcome!
reply 1

I should have a chapter of my story up tonight with your shoutout(:
reply 0

Okay thanks so much!!
reply 0

Do you notify?
reply 0 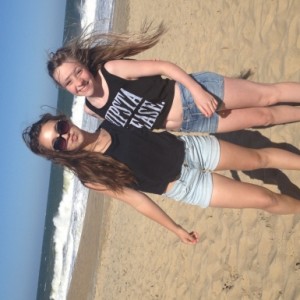