Hey everyone! Sorry it's been awhile since I last updated. I don't know if it's just me, but Witty takes 3 zillion years to load from my computer so updates don't always work out. So if I miss a couple of days, that's most likely why.

So yesterday, the boys had a show in Baltimore! And now they have 10 days off before they continue the rest of the US leg of the tour! The next show is in Columbus, Ohio on August 18th! Other than that, Harry was seen in Washington DC. The other boys weren't seen today.

Oh and by the way, sorry these have been pretty ugly and colorless lately. Formatting has also been an issue lately and I have no idea why. I've been doing this over 3 years and haven't really had problems until now. Go figure.
4
Share

I know, it's just the best feeling! Tour time is #1, but when it's over, it's so, so great to have album season! Personally, I don't have much going on in the Fall, so it means so much to me to have something so great to look forward to! I'll admit, it will be hard for me whenever the boys stop releasing new music every year, but right now, that doesn't matter. Album #5 is on it's way! :)

That's good advice- Stick to what you know is right. With jobs (and with everything, really), I think it's so important to follow your heart.

Haha! That's really what you thought? Wow...that's crazy. For me, I kind of watched it as an outsider. I liked it, but I didn't see myself as a part of it all, you know? I actually felt that way as a fan for a while-like I was different. Anyways, it's crazy how things can surprise you and teach you about yourself, huh? Yeah, so now we know what the announcement was. I can see how it was an announcement for people who don't like the boys, but for us, it was almost like, "Yeah, what's new?" I'm honestly so excited to Louis and I'll be here for him through this whole crazy wonderfulness. But that seems like something that is separate from One Direction. Well, at least we don't have to worry about tickets...but now I want to worry about them, haha. Soon, pal! Soon! :) Yes, exactly. We know how to handle what we're used to. This system of the seasons we've had with the boys is a nice system, and I hope it sticks around and continues to work well for us and the boys. Alright, if you like to take videos, then I'd love to see some! I don't like to video-tape during the concerts, but if you do, then go ahead! Next year, I think I'll take some, as it would be nice to be able to see what the concert was like from your point of view forever. Yes, the food looked really good! I wasn't hungry, so I didn't have much, but honestly, I think you'll like it. And the whole party is just fun, so I can't wait to hear how you liked it! I talked to the girls at my table, which was really fun. If I wasn't at a 1D concert, I'd most likely keep to myself, but you know all of these girls like to talk about the boys, and it's really great. In El Paso, I only talked to one other girl as the tables were smaller and everyone was with someone else, but I've learned that everyone's pretty inclusive there. You'll love it. :) Yeah, the voice guy does get a bit annoying after a while, but it does help, haha. :) Yes, they did at my concert. But get this- You bought a plastic cup for 6.50 and they had one fountain that everyone could fill it up at. The lines were always long, but the cup was an okay size. It was ridiculous, but it might have only been TCF. Plus, I think they also had other drinks you could buy and they always have some at the UAN party. Well, I think that type of battery is okay. I think it's just the battery-batteries you're not allowed to bring in. Does that make sense? That's so great, Jenny! Hold onto that, pal. :)

Yeah, over-thinking never really gets you anywhere, does it? It definitely doesn't here. Yeah, that's a good point. Plus, it's so strange to just completely end something just because you're unsure right now. I mean, his break up with Perrie was so sudden, too. Maybe that's just how Zayn leaves:suddenly. With someone who's so quiet, it's sometimes hard to know what they're thinking about doing before it happens. And when they do it, people ask, "Hey, where the heck did this come from?" when they had really been thinking about it for a long time. So who knows. Zayn does.That's probably it. Yeah, it hurt me, too. It showed me that they really don't know how much we love them and it made me feel sad that we hadn't shown that to them before. I hope they know now, or at least more than they did before. :) Yes, that really is how it made me feel. Of course, the nostalgic-ness of it can make you wish for then, but when I paused it and took a step back, I could see that now was only better. I'd definitely recommend watching it before your concert and pausing it sometimes so you don't get overwhelmed by how beautiful and good 2013 was. :) Oh, and maybe not right before your concert. Doing that almost threw me off to the fact that it is 2015, haha. Yeah, I do miss seeing more behind the scenes stuff. Hopefully we'll get some sometime.
Haha, I've never heard that term before- a broken ship. Oh gosh, yes. It's terrible if one of them dies. :(

I'm sorry this is taking me so long! Going to Florida really threw me off! I really want to write it all down. I've just been so tired and a little blue about being home. I'm waiting for the right time, I guess. I'm sorry the right time has been taking it's sweet time to get here!

Yeah, you're right. Now that I think of it, almost all of the first videos from their albums have had some touch of comedy to them. They've all been pretty light-hearted. Then again, every One Direction video has been pretty light-hearted, haha :) I'd like a serious bad-*ss video someday, but honestly, I love the way the boys do videos. I think it'll probably be funny too since they went to NASA. I can't wait to see it! Yeah, sorry, pal :( No videos for me. I'm glad you liked that! Thank you for those pictures! I loooved that :) Here's something beautiful :) https://pbs.twimg.com/media/CMByTztVAAErg5P.jpg

Hey pal! I'm still having so much trouble getting witty to work from my house. If you could do an update I would really appreciate it! If not I'll talk to you soon!!
reply 0

Yeah album season is pretty important because it eases you out of tour season. It fills the void that the tour once filled. This year it's been said that the album is supposed to be out eariler? So that's going to kind of ruin having something to look forward to all fall. But at least we get to enjoy it! I'm just trying to enjoy what we have right now.

That's what I always try to do. It can be hard sometimes but following your heart is always important.

Yeah I kind of did feel that way. Because I was always known in middle school for being this Jonas Brothers freak. All Jenny does it freak out over boybands. So when I first started liking the boys, I kind of didn't want that reputation. But I got it anyway, but I'm okay with it now. And I felt like an outsider a bit too, especially amongst the British fans. They would always brag about being the ones who started the boys fame. And I don't know if you remember but in the beginning it was always a big argument over whether or not American fans were as good as British fans. So sometimes that was awkward. But now none of that matters! Yeah that announcement was a total bummer. Like you said, I'm happy for Louis but we knew about it already. And as far as 1D goes, it really has nothing to do with them as a band. But did you hear abou that video from Louis' Cinderella Ball? Apparently some guy says Louis is going to be a dad and then Louis chimes in "no I'm not". Now I'm super confused. Have you heard it? But on the bright side, you'll most likely be home now when tickets go on sale! Yeah we definitely have a good system going. I hope it stays that way! Yeah I mean, I don't like to record non stop throughout the show. That ruins it. But I would like to get a couple here and there so I have something to look back at. It is a great feeling to see a video you took and remember what it felt like to be there in person. Ah okay! Good food and chatting with other Directioners is always a good time! I'm looking forward to it now! I just hope I don't get lost like I did last year. That's why I never found the party. But you're right. Most of the fans are pretty inviting. I think we all just want a big group to just chat with about the boys! Ah okay! I'm weird that way but I need water or I'll die. I think I have a fear of fainting in public or something. But it's good to know there's opportunities to have something to drink. I just hope there's a chance to pee! Oh yeah, I know what you mean. Just not the kind of batteries that you remove from something like AA or AAA batteries. :)

Yeah things seem that way a lot for Zayn. Maybe he's just not good about sharing his feelings. He probably does think about things for a long time and then just does them. It throws the other people involved for a loop but it might just be his way. And I do really feel bad about Perrie. But to be honest, I think she can do better. If all of those cheating rumors were true, she can find someone else who won't do that. Yeah I think the way we handled everything when Zayn left was a big wake up call for them. I definitely think they understand more now than they ever did. I think I will watch it. I'll definitely marathon the movie and the tour DVDs when I get the chance. It might make me feel better after PCD. Or maybe not. I'll watch it when it feels right.
Yeah I hear it all the time with the various things I watch. And deaths of characters, especially your favorites is always bad.

That's totally fine! Do it when you're ready! And I'm glad you had a great time in Florida! Maybe some day we can all go together!

Yeah lighthearted videos are what suits them I think. Them doing a serious video just wouldn't fit. And after Gotta Be You, they never had girls in their videos again. At least not as the main character! And yeah NASA is great! You know I like that kind of stuff so them filming there should be interesting and I know it will be funny! Yeah no problem! The whole time you were away I've been saving pictures from tumblr to show you! 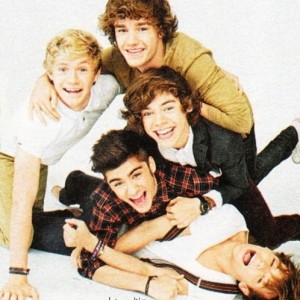